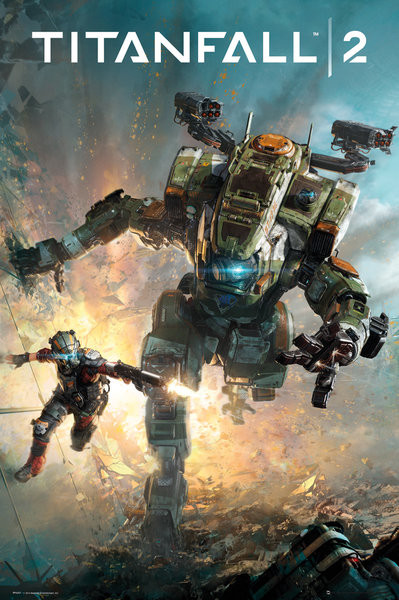 “Titanfall 2” is one of the best RPGs I have ever played. I have not played the other games in the “Titanfall Franchise” but after this I think I will. I’ve always been a fan of science fiction and mechs. This is a game with rich lore, awesome gameplay and a truly memorable story and multi-player. This is a very beautiful game and the game itself is on par with the cinematics that take place before and after action in the campaign. I’ll get into more details below but this is a game that I highly recommend.

The game was developed by Respawn Entertainment and distributed by Electronic Arts while being directed and written by Steve Fukuda who co-wrote it with Jesse Stern and Manny Hagopian.

The Graphics and Cinematics – This is an immersive and beautiful game. Whether it is in-game or the videos between missions and before they start. It pulls you into the world and the life of a Titan pilot.

Frontier Defense – Frontier Defense is one of the multi-player options and it is my favorite multi-player co-op I’ve played in a long time. Frontier Defense has you choose Titans who play different roles as you protect the Harvester from attacks from IMC forces as they attack you in 5 waves. My favorite Titans are Scorch who is a defensive heavy and Ion who is an offensive unit with a fantastic lazer attack as their ultimate. I’ve tried out all the Titans and learning how to play them all and leveling up their skills gives Frontier Defense so much replay value. I’ve been playing it with two of my friends and look forward to doing so once more.

The Campaign – The campaign is solid and is a wonderful hero’s journey. No character is complicated but the simple tropes they represent are given nuance and no character is perfect. The stakes also remain high through the entire narrative as you have to stop the IMC from using a Fold weapon powered by the Ark that they hope to use the destroy the militia homeworld of Harmony. After your mentor is killed he hands over control of his Titan By-7274 to you in order for you to fulfill the mission and stop the IMC and the Apex Predator mercenaries they have sent after you.

A Hero’s Journey and BT-7274 – Jack Cooper’s story is a fairly basic hero’s journey. Jack goes from being a rifleman who is thrust into the role of a Titan Pilot after his mentor is killed. It is at this point that we see him and BT-7274 develop trust and affection for one another. BT is very literal while Jack likes to joke around. I really enjoyed their dynamic and how their relationship is developed as BT learns to understand different expressions of speech and in the end sacrifices his life to save Jack as losing his former pilot forever changed and he would do anything to never lose another pilot. BT is the best character in the game and I felt when he sacrificed himself in the end to save the day.

The Apex Predators – The Apex Predators are the mercenaries sent by IMC to stop the Frontier Militia this game. There are the unhinged members like Kane and Richter. Professionals like  Ash, Viper and Slone and the leader Blisk who respects you so much after defeating his crew that he gives you one of their cards and lets you live. Fighting them once so much fun as each involved different tactics. Viper attacked you from the air and had heavy adds attacking you. Ash was fast and fought melee style in her Titan and Slone attacked with a bunch of different adds, could warp around the area and had a powerful lazer attack. Defeating each of these bosses was part of what made the campaign so much fun and I loved their unique personalities and Titans.

The IMC – The Interstellar Manufacturing Corporation (IMC) are the overarching big bad is just an evil corporation trying to wipe out the rebellion (Frontier Militia). The Apex Predators all have unique personalities and drives but the only agenda of the IMC is to wipe out the Frontier Militia. What is the world they imagine and want? We get flashbacks of them in control of the planet but never what their overarching ideology and goals are. This was a shame as they felt wasted as an antagonist.

If you are looking for a game with a fantastic campaign, fun multi-player and intriguing world you should check this game out. I intend to check out the rest of the “Titanfall Franchise.” If the rest of the series is this fun then I can’t wait to explore the wonderful lore and universe of this fantastic sci. fi. series. To anyone looking for a great FPS with an amazing immersive world than this is the game for you.