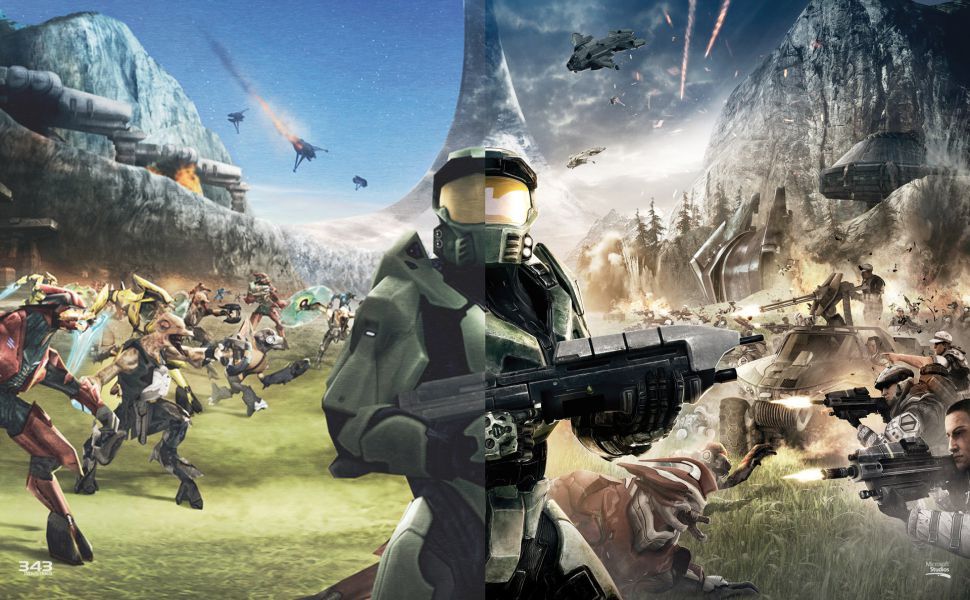 “Halo” is a game that I played multiple times growing up, but never had the chance to complete until now. I remember playing it at friend’s houses in High School and College and each time found myself fully drawn and involved in whatever mission we’d do or if we’d start from the beginning. This is game is an epic space opera and the simple mystery and story serves it so well. The gameplay also holds up after all these years and the A.I. being strategic leads to some wonderful challenges during the missions. Without going into spoilers, this is a game that has been out for years and is one I highly recommend. I bought the “Master Chief Collection” on Steam and the Anniversary version of “Halo” gives you the fascinating option of tabbing between the original graphics that look like they are from an N64 in quality to the more beautiful modern graphics today. If you are a fan of shooters and science fiction games I’d say this one is well worth a buy.

The original “Halo” was made in 2001 with Microsoft releasing the “Anniversary” version in 2011. The “Anniversary edition was developed by 343 Industries and Saberinteractive, with Bungie, Gearbox Interactive and Westlake Interactive developing the original game with the publisher being Microsoft Studious and Macsoft.

The story follows Master Chief when he is awoken from cryosleep when the retreating United Nations Space Command (UNSC) ship Pillar of Autumn stumbles upon a mysterious Halo. From here Master Chief and Cortana must uncover the mysteries surrounding the Halo and what the enemy Covenant forces are seeking upon it.

The Gameplay – The gameplay still holds up to this day. The enemies react and think strategically, with Elites jumping and dodging and the grunts who follow them panicking. There are also the Hunters who can only be hurt by being shot in the back and Flood who have multiple weapons and attack in hordes. You can use Covenant weapons and vehicles and the play very different from UNSC vehicles and weapons. The mission progression forces you to learn and get good with all of these things and rewards you for well done tactics against them. The game is so much fun.

The Soundtrack – The soundtrack one of the best in any videogame. It has this gothic operatic feel to it that gives you the stakes and how epic the war to save humanity is. Martin O’Donnell and Michael Salvatori truly created a beautiful masterpiece. I’ve used this soundtrack in the past for creative writing it inspires so.

The Universe – This a fantastic universe we are introduced to. We have humanity on the run but still fighting against the larger Covenant forces that are seeking to wipe them out. Along with this we get the mystery of the Halo and with it the Forerunners and the Flood and hints at a greater world that we are a part of. I’m a huge fan of this universe and finally finishing the game that started it all showed me where it all began.

The Covenant – The Covenant as they are presented in this game are an Alliance of aliens seeking to annihilate humanity. They have advanced technology and are seeking power to end the war. I loved fighting them. The Elites have cloaked units, can ride vehicles and command Jackels (snipers) and Grunts (the main ground soldiers) against you as well as fielding large creatures called the Hunters who travel in packs of 2. When the Flood are released they are in the same boat as you as the Flood overwhelm both the Human and Covenant forces on the Halo.

The Flood – The Flood are a parasitic species who turn their hosts into zombies and seek to consume all life. They are so creepy and I loved their horror movie introduction and the fact that they send so many at you with such a variety of weapons that you need to always be moving in order not to get overwhelmed. This game is full of apocoylptic threats to Humanity…from the Covenant, to Guilty Spark and the purpose of the Halos and the most horrifying unending Flood.

The Mystery of the Halo – The Halo function a lot like the Reapers in “Mass Effect.” They are there to wipe out all organic life so that the Flood will not win as all it takes is one flood in order to spread and when they spread they cannot stop…so the Forerunner plan was to starve them and ending all life was the way to do so. We see this all through Master Chief and Cortana’s eyes as they learn about the truth of the Halo along with us. This was great storytelling and part of what makes the game work so well.

343 Guilty Spark – Guilty Spark is an A.I. who in has lost all contact with the other Halos. You get the idea it’s gone a little made in the time it has been and all it really has is the program and activating the Halo if the Flood ever becomes free. Guilty Spark is very matter of fact even while doing devastating experiments and even has nostalgia at the time before during the Forerunners, which you can listen to at Terminals. It really is a fascinating character and I liked the twist that in the end it was the main antagonist, not the Flood or Covenant who had been the main threats through most of the game.

The Rising Stakes and Ending – This movie has consistent rising stakes and in the end all the people Master Chief was trying to protect are destroyed by the Covenant, Flood or when Master Chief and Cortana destroy the Halo. The universe is saved but it costs everything. I felt that and the game handles the rising stakes so well. You begin saving squads to bring the fight to the Covenant but then your Squad releases the Flood and eventually they consume your boss Captain Keyes and most of the UNSC forces. Even at the end the dropship coming to save you is shot down by Covenant Banshees leaving you to make a last minute escape out of the Pillar of Autumn before you blow up the core and prevent Guilty Spark from activating the Halo.

Master Chief and Cortana – Master Chief is alright. I appreciate how sassy Cortana is to him but I don’t know his motivation beyond the mission or why he was in cryosleep. They care about the crew and their fellow soldiers but I feel like the relationship could have been developed further. These were two minds that needed to depend fully on one another to destroy the Halo and stop Guilty Spark from destroying all life in the Universe. Again, they weren’t bad but the relationship was pretty basic compared to Jack and BT in “Titanfall 2.”

Defining Enemy Leadership – We have the Flood and the Covenant but in the first game we don’t really learn much about who are what they are or who leads them. We know both are aliens and the Flood are all about consuming everything but Guilty Spark has way more definition and clear goals than either forces. I know this gets rectified in 2 but if Halo 2 had never been made and this is how the world had ended the game would feel underwritten here. They all still feel like a threat and the stakes continue to rise, but I wanted more world building in this game. We see everything through Master Chief’s eyes but besides Cortana and Guilty Spark not many people answer his questions or give him information beyond the mission.

This is one of my favorite games and it does still hold up after all these years. If you are a fan of first-person shooters, epic science fiction space operas and want an introduction to one of my favorite science fiction universes you should check out this game. This game is a classic and was Microsoft’s way of selling their game systems for good reason. I look forward to beating the rest of the series.