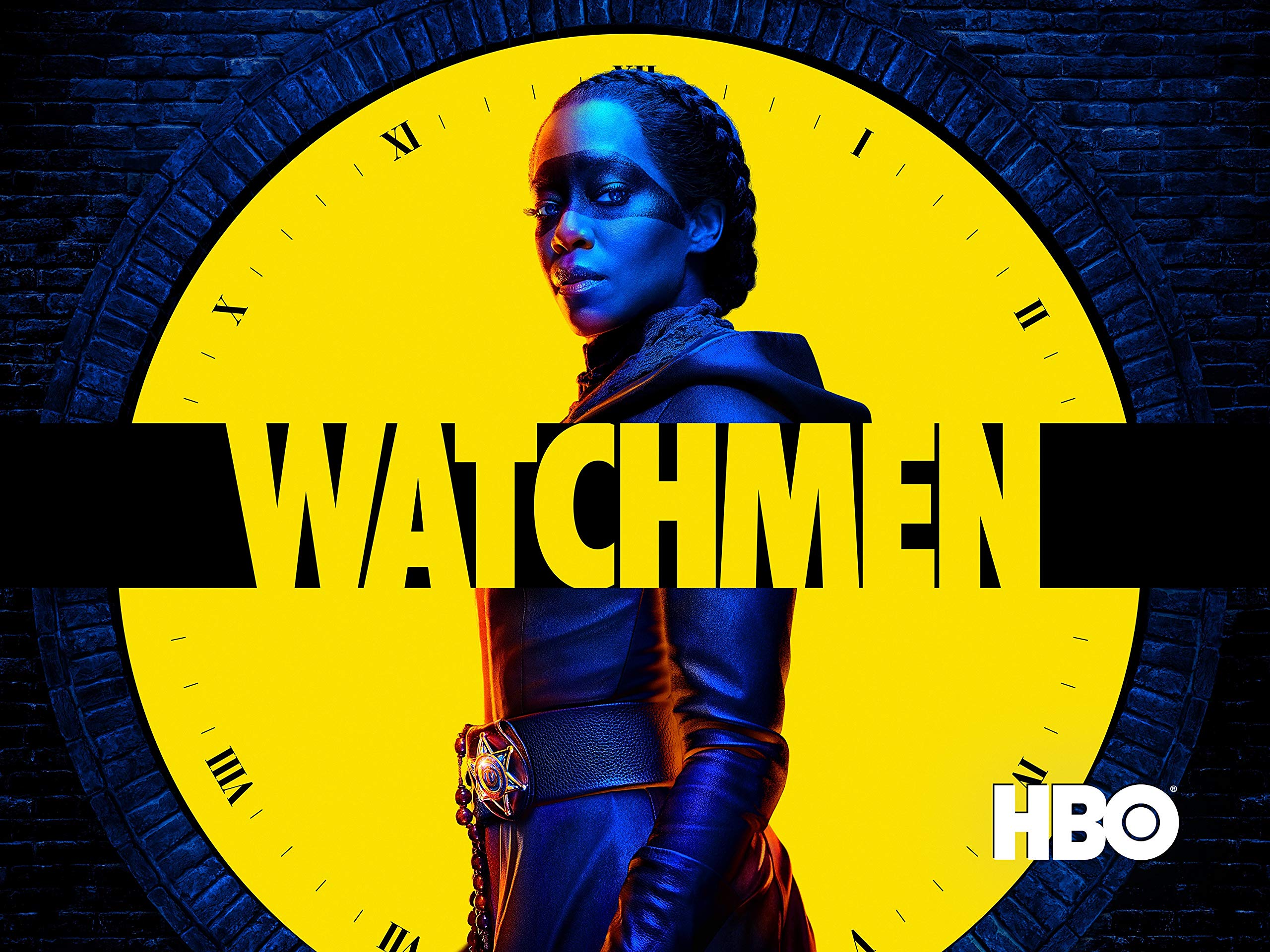 “Watchmen” is one of my favorite comics of all time. It is a complete story that I’ve gone back and re-read multiple times and each time I notice more details or layers in the story. Alan Moore is truly a genius warlock. “Watchmen” was always going to have more stories come out of it though. Alan Moore never owned it so DC incorporated the characters into the rest of the DC Universe and did a whole “Before Watchmen” series that I have yet to read. So knowing this I was curious to see what Lindelof and HBO would do. Suffice to say, overall I think they did a good job. “Watchmen” never needed a sequel or prequel but this at least tells a story that matters.

This is a flawed and really good series. Like the original “Watchmen” it tackles matters of oppression and power of the past and present and gives us the evil and insidiousness of white supremacy as well as exploring how we face and deal with trauma. Without getting into spoilers this is a show I would recommend. The main parts where it falls is when it tries to incorporate too much from the original comics and where it stands strongest is where it tells it’s own powerful story.

The series was created by Damon Lindelof and produced by HBO.

The story follows Angela Abar / Sister Night (Regina King) as she works to uncover and stop a white supremacist organization known as the Seventh Kavalry who take their inspiration from Rorschach.

The Soundtrack – Trent Reznor and Atticus Ross and an amazing job on this soundtrack. They give this series a dark and fantastic feel to it and it was part of what kept me involved in the story through all the different events that happen. The music is intense and blends so well with the events that take place.

The Universe – This is the Universe of “Watchmen” a world of superheroes, high technology and that reflects the problems of our own world. Like the original comic this is a world meant to reflect the oppression in our own and this show’s universe captures that beautifully.

Wade Tillman / Looking Glass – Wade Tillman was a Jehovah’s Witness who was there during the event of the Giant Squid that stopped the Doomsday clock. After he is conned and left naked in a carnival he leaves the hall of mirrors to the apocalypse from the event. This changes everything about his character and he becomes a person seeking truth as part of the police force and becoming the vigilante Looking Glass who wears a tin foil mask (and has it in his hats) to protect from psychic attacks. He is played so well by Tim Blake Nelson and seeing his arc payoff as he takes off the mask as he confronts his trauma and film is powerfully executed in the narrative.

Will Reeves / Hooded Justice – Will Reeves’s story is the main overarching narrative and the strongest arc in the show. Will’s family was killed by Klan during the Tulsa Massacre of 1921 where white supremacists burned Black Wall Street to the ground and massacred the residents living there. Will and a baby he rescues are some of few survivors of the event. After this he becomes a cop in New York City and attempts to take on the Ku Klux Klan as a cop but due to systemic racism and white supremacists on the police force he is nearly lynched and adopts the identity Hooded Justice to fight against them. Eventually this costumed identity and his own repressed sexuality lead to his relationship ending between his wife and son (He has a relationship with Captain Metropolis like in the comics) and he stops being Hooded Justice until Dr. Manhattan pulls him back into the story in order to protect his Granddaughter from the Klan who are active in Tulsa. During his time as Hooded Justice he also has to pretend to be white under the mask due the racism and prejudice of those around him with Captain Metropolis being the only one who knows his true identity. 3 different actors portray Will Reeves and each of them do a fantastic job. Louis Gossett Jr. plays him when he is 100, Jovan Adepo plays him during his time in the Minutemen and

The Pasts Revealed – The strongest parts of the story are the backstories of the characters. I loved getting Angela Abar’s backstory growing up in Vietnam and how the murder of her parents inspired her to be a cop. Looking Glass’s story as a victim of the psychic attack on New York with the giant Squid was fantastic too as was Will Reeves’s story. These stories are all told in flashback and are the strongest narratives in the show as a whole.

Systemic Oppression – Systemic Oppression through white supremacism and colonialism are major themes in the show. The story begins with Will surviving the massacre of Tulsa by the Klan and we see how entrenched racism is within the police force and politics of the United States as he grows up. In each part of his life it is revealed in a different way. From the cops being members of the KKK and protecting the KKK, from having to pretend to be white among the Minutemen and the Police Chief and Senator from Tulsa also being members of the KKK and his working with Lady Trieu to stop them from getting Dr. Manhattan’s power. Will Reeves and Angela Abar reveal these stories. We also see colonialism in the death of Angela’s parents as Vietnam is made the 51st state and it is a man fighting for Vietnamese Independence who kills them by setting off a bomb. I wish the colonial narrative had been explored further but how it explores systemic racism and white supremacy in the United States is done extremely well.

Tulsa, Oklahoma – The greatest stories in this show are the ones that tackle the oppression in the past and present. We start with the Tulsa Massacre and how that shapes Will Reeves and see that oppression in White Night when white supremacists attack Angela Abar and her family. Tulsa holds the history of so much oppression in the United States and the show doesn’t shy away from that reality as well as also giving us the story of African-Americans who fought to stay against racism and oppression and make a life after it was taken away from them and their ancestors. Tulsa is the heart of the show as all the events of the show transpire here and the ways it explores oppression and justice are part of what lends so much power to the story.

Trieu Industries – Trieu Industries is one of my the major players of the story as Lady Trieu is trying to capture the power of Dr. Manhattan and is the one pulling the strings behind many of the events of the story. She is daughter of Adrian Veidt and wants to use the power of Dr. Manhattan to end injustice. We get some of her motivation in her mother’s story Bian, who was a Vietnamese immigrant who was a cleaning lady who worked for Veidt and stole a semen sample to get back at him. From this we can see her aims and she wipes out the Klan who are under the guise of Cyclops and the Seventh Kavalry but we don’t get more beyond this. I hated the fact that they made her Veidt daughter as she didn’t need that “Watchmen” connection to be a compelling character and it made the world of the show so small as everyone was connected to a member of the Watchmen in some way which limited the original stories that were being told. Trieu Industries wasn’t bad but there was so much unused potential and Lady Trieu’s desire to become a God needed much more exploration.

Dr. Manhattan and His Use – Dr. Manhattan functions as a McGuffin in the story whose very prescence ruins the stakes. He causes a paradox when his conversations with Angela Abar cause events to happen that already happened and the fact that he is only defined as those wanting his power causes him to be ildefined. We get to see him become a God and create a civilization on the moon Europa but that doesn’t go anywhere beyond getting Adrian Veidt out of the story for a bit until he can be there to save the day and be held accountable for the original Psychic Squid attack. Dr. Manhattan’s only purpose seems to be to connect characters together (Will and Angela) and to be the McGuffin all the enemies want. This is a shame as the time he is the human Cal are quite compelling. It is once he becomes a God again that things fall apart and in turn reveal the weakness in the plot.

The Final – The final ends with Adrian Veidt returning back to Earth after his daughter rescues him from his asked for exile on Europa (where he simply entertains himself until being rescued). He stops his daughter with the squids as he freezes them and breaks Lady Trieu’s machine, keeping her from ascending to godhood. After that he is taken in by Laurie Blake and Wade Tillman to stand crimes for the 3 million he killed with the psychic squid attack on New York and we get the suggestion that Angela, who was in a relationship with Dr. Manhattan may have inherited his power. Given how his power was useless for saving people so much of the time I wonder if this is really a rewarding ending. Being Dr. Manhattan is a curse and this show does little to show that it would not be the case for whomever became him next. Veidt being brought to justice and killing his daughter felt tacked on and as great as Jeremy Irons is as Veidt, his story was the weakest.

This is a series that isn’t perfect and I think telling it an anthological way would lend to the strengths inherent in the writing. This is Angela Abar and Will Reeves’s story is the best part of the show and speaks to oppression in the past and present. It is the times that it gets cosmic with Dr. Manhattan and Ozymandius that it really falls apart. This is a show I would still highly recommend. HBO made it free to watch over Juneteenth to educate people about the Tulsa Massacre and to remind people of the ongoing oppression of African-Americans here in the United States as well as the impacts of colonialism in the world. This is a powerful show that is well worth your time. I hope it inspires action as the fight for equity and justice is ongoing and it is only through action and work that anything will change.

8.6 / 10 The ending issues bring down the solid character narratives.

In the ongoing fight for justice and equality here is the Tulsa Justice Fund.