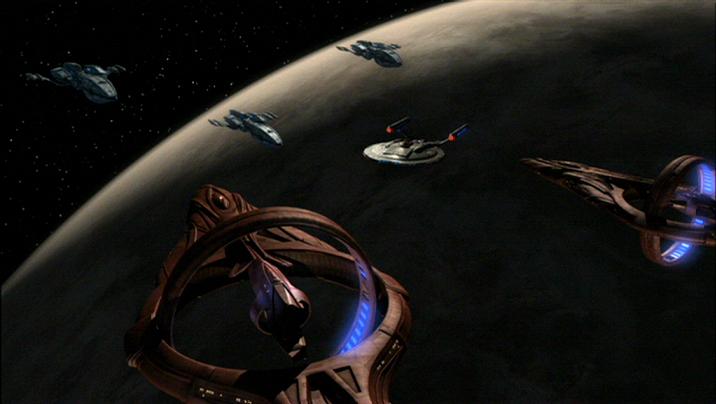 “Cease Fire” is an example of “Enterprise” doing “Star Trek” right. This is an episode all about diplomacy and gives us echoes of the foundings of the Federation as well as some great character work with both the Andorians and Vulcans. Before I get into spoilers, this is an episode I’d recommend to any fan of “Star Trek.” It is well worth the outing and a great example of what “Enterprise” was capable of.

The episode was directed by David Straiton and written by Chris Black.

A territorial dispute between the Andorians and Vulcans over a planet leads to Commander Shran calling Captain Archer to negotiate a cease fire.

The History and Politics – The history and politics that are the backdrop to this episode are what give it so much strength to the narrative. We have a territory that was once held by the Andorians but that the Vulcans kicked them off of because they feared it as being a jumping off point to attacking their territory. In this episode the Andorians back and are furious as they see the work they were putting into the territory to make habitable (as well as their original claim to it) as nothing more than Vulcan imperialism and aggression. This is handled really well as what this territory and the war with Vulcan means has quite a few different Vulcan and Andorian points of view. This isn’t a simple fix and the politics and history behind the territorial dispute illustrate that.

Soval and T’Pol – Soval and T’Pol have a really cool relationship in this episode. In this we see that Soval admires her and believes that she could have easily been his second-in-command if she hadn’t worked with Enterprise. T’Pol never states it outright but she admits how much she has grown with the crew and that she is grateful for Soval’s belief in her. For much of the episode she is protecting him when their ship is shot down in enemy territory and Shran’s ask of Captain Archer was that he wanted to speak directly to Soval. Soval fulfills the end of his bargain and from it begins to see where T’Pol is coming from with the humans and it is beautifully handled.

Commander Shran and the Andorians – Jeffrey Combs is the best part of “Enterprise” and always has been. He brings complexity and politics to any episode he is in and in many ways functions as an anti-hero or outright hero in conflicts that humanity and Vulcan face. In this episode we see why he is trusted with leadership as he doesn’t settle with go-betweens and arrests his second-in-command when she attempts to assisinate Archer, T’Pol and Soval. It is this conflict that helps him see that his side is hardly perfect either as the Andorians and Vulcans are both given nuance in this dispute. Combs steals every scene is in. The Andorians are also very distinct in this episode. They are warriors have an honor code and it drives all they do.

The Role of Enterprise – The role of the crew of Enterprise is handled wonderfully in this through the actions primarily of Trip. In this episode he is involved with stalling the Vulcans and Andorians from attacking each other to give time for Soval to get to Shran. In the end he succeeds and this is where the crew being stubborn is only an asset in a conflict that may finally have a chance to end.

Holding Archer Accountable – Archer is not a good diplomat. He talks down to whomever he’s around and seems incapable of seeing any view beyond his own except when he’s talking to Shran. When he’s talking to the Vulcans he is just as stubborn as the worst of how Vulcans are presented in “Enterprise.” He does succeed and his mentality that Trip carries on does save the day, but I still hate that mentality. Archer’s diplomacy made me appreciate the diplomatic skills of Kirk and Janeway…and both them are hardly subtle.

This is a great episode and definitely a favorite in “Enterprise.” This episode helps set the stage for further negotiations and conflict that Andoria will have with the other members of the future Federation and I love that we get to see the Vulcans and Andorians developed further as people. This episode is what I’d love in future episode of “Enterprise” as developing the world and lore is really where this show was strongest, especially in regards to the species who would later be founding members of the Federation.

Final Score: 9 / 10 This episode is great and easily one of the best episodes of “Enterprise.” The only thing keeping it from perfection is how insufferable Archer is at times.