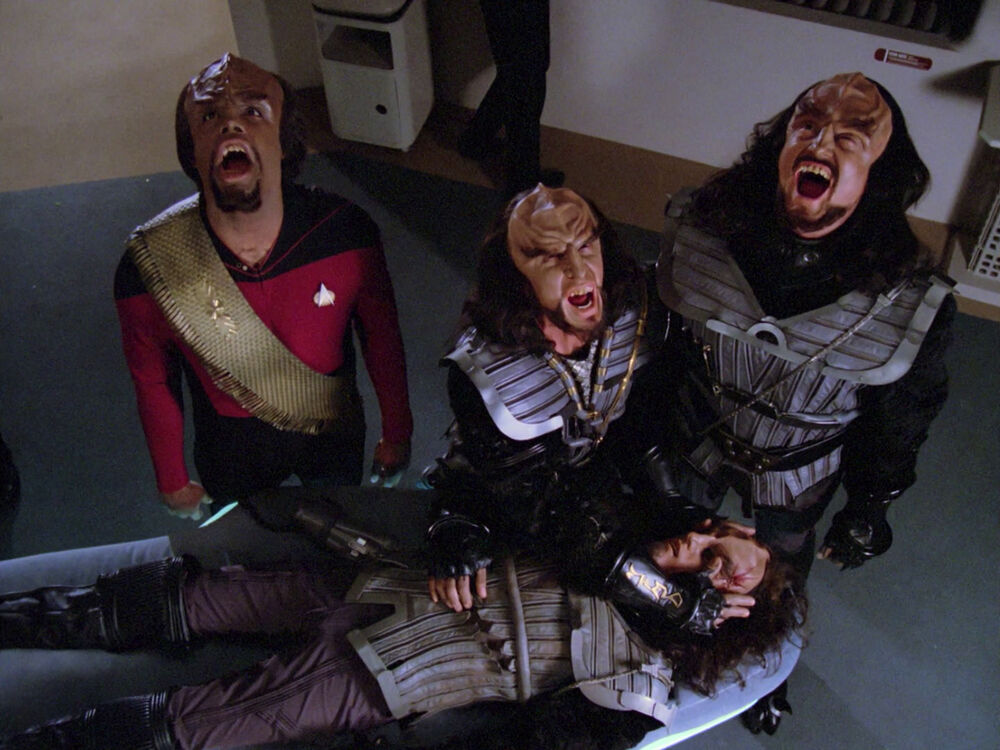 “Heart of Glory” is our first time seeing the Klingons since the “The Original Series” films and it is from this that we begin to see the people they will become in “The Next Generation” and “Deep Space Nine.” This episode shows a lot of the problems of early TNG though as most of the cast is stilted and acts snobbish or condescending, especially Riker and Picard. This is an overall enjoyable episode, but it is still Season 1 and all the problems that came with that.

The episode was directed by Rob Bowman with teleplay by Maurice Hurley and story by D.C. Fontana and Herbert Wright.

The story follows the Enterprise when they investigate the site of a battle and a damaged freighter in the Neutral Zone.

The Damaged Freighter – The set of the damaged freighter is fantastic. You have fog and tubes everywhere and sections that only Data can reach or get past. It is dangerous and there is a timer. All of this is handled beautifully and the soundtrack complements the mysterious and dangerous dying ship.

The Soundtrack – The soundtrack is one of the few great parts of season 1 and this episode does a good job with that. The Klingons theme involves war and drums, the ship has this mystery riff in the song and tension is consistent. I wish this had been a through line in all the series.

The Klingons – The Klingons feel like they are becoming the ones we will know later in “Deep Space Nine” and the Klingons from the film. The makeup is similar to the TOS films but we begin to see the more combative honor that would define them in TNG and DS9. Korris played wonderfully played by Vaughn Armstrong is fantastic as a Klingon fanatic who with two others could not grow with the Klingons to finding honor beyond finding war everywhere. He help Worf realize that part of himself though and in him and Konmel you see what Klingon fanatacism looks like in this century.

Worf – Worf is great in this. He remains professional and for the first time we get to see him explore his Klingon side. We learn about his adoption by a Federation officer and how he views battle as one of control and an internal battle. This episode really encapsulates what honor means to Worf versus the external honor that Korris and Konmel crave by fighting foes of the Klingon empire. Michael Dorn does a really great job and his scenes with Vaughn Armstrong’s Korris are gold.

Seperate the Saucer Section Obsession – The saucer section is immediately suggested when the crew is off to go to the place of a battle. This strikes me as such a waste and also that we never see the saucer section used well. There is an obsession with the battle station throughout the episode that leads nowhere.

Captain Picard – Picard spends a good few minutes exoticizing Geordie’s eyes when he is seeing from them. He even says, “I feel I understand him now.” If I was Geordie in this I’d feel so used and talked down to. He is an experiment and we never get his perspective beyond his eyes it is all Picard’s perspective and voice. This was peak cringe season 1 of “The Next Generation.” We see this again when he questions Worf’s loyalty on multiple occasions. It is awful.

This is one of the few episodes in Season 1 that works on some level. The Klingon stuff is all good but it is brought down by how awful the human characters act. This is an episode that truly could have been great if Riker and Picard had acted with some level of empathy towards those around them. Their stilted disconnect that Tasha Yar demonstrates at one point as well just illustrated how poorly nearly all the people were written. The Klingons deserved and a better episode.

Final Score: 7.5 / 10 Enjoyable and carried by cool sets, soundtrack and all the Klingon characters.