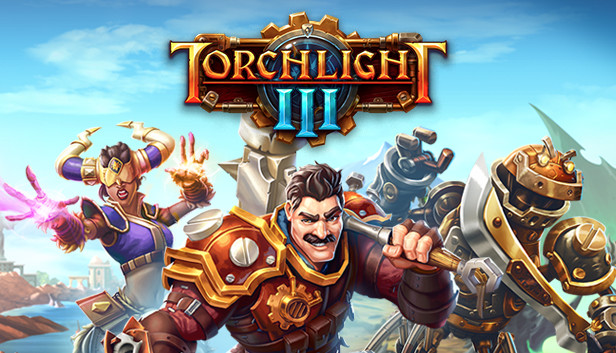 “Torchlight III” is thus far the only game I have bought in early access. This is my second favorite of the 3 games in the “Torchlight Franchise.” The first game still has the best narrative and gameplay but “Torchlight III” has a better story and gameplay than “Torchlight II.” I’ll explore all of this deeper into the review but until then this is a game I’d recommend to any fan of the earlier “Torchlight” games or for folks who enjoy a good dungeon crawler.

The game takes place centuries later after “Torchlight II” with ember corruption having spread from the clockwork core and an ancient evil attempting to conquer the world with the Netherim. It is up to you as the Sharpshooter, Dusk Mage, Railmaster or Forged to stop them.

The Gameplay – The gameplay mostly works. The only con I can say against it at this time is it does fall into the grindyness that most dungeon-crawlers suffer from but this one makes up from it from the themed zones, the challenging boss fights, the personalization of your fort and the variety of character classes you can play.

Your Fort – One thing that sets this game apart from the past games in the franchise is the fact you get a fort. In this fort you can re-distribute your skill points, build up defenses against elements (Fire, poison, etc.), enchant items and save armor sets. For these reasons I always enjoyed coming back here as I figured out how to make the most of the artifact I chose (Fire based) from which you choose your skills from. The game is still in early-access so I’m curious what new things will eventually be added too.

Character and Artifact Variety – One thing that works about this game is the character variety. I chose to play as the Forged who is a robotic warrior class but you also have the rogue-like Sharpshooter the Dusk Mage and the Railmaster. These characters do not play the same and I can’t wait to explore that different more in the future, as well as try out more of the artifacts and the skills they offer.

Pets – This game has a lot of pets and you earn more by defeating bosses. Each of them have different effects that boost your character in different ways. I started with a dog (one of the starter pets) but ended with a teal dragon. You can name them like in the prior games and you have multiple birds, mammals and reptiles that you pick up along the way. I’m really curious if we’ll get Nethrim pets when the game is finished given how powerful your character is by the end of the game.

The World – The world is the richest it has ever been as far as new characters and lore. You interact with scientists and towns that give flavor to the different regions and each region feels like it fits the location be it mountainous, swamp or the artificial ancient crafted world of the dwarves. Each region has a unique enemy being controlled by the Netherim, which made exploring it all the more fun as you find flavor text around the areas and see what drives the boss in the area. You also run into world bosses who fit the area and are a great challenge to level up your skills before the usually more difficult act bosses.

The Enemy Factions – The first faction you face are the goblins. They are fun to face and their primary element is fired. They are lead by the warrior Brall, she is a hunter with a large bow who summons a ghost wolf to fight alongside her in battle and is completely loyal to the mysterious “Mother.” There are the Hyvid who are an insect-like race whose larva can turn humans and goblins into zombies and are lead by the Harley Quinn like Sadista who killed their Queen and wants to overthrow “Mother.” The sister is Varis is the one who is the most competent as she uses human mercenaries to enforce her will and controls the Vultera, an advanced bird-like with the best technology in the game who have come to inhabit the dwarven ruins. We also hear about other worlds and creatures that the Netherim compete with for supremacy over worlds.

The 3 Sisters -The sisters are great and they all fight differently. Brall is the loyal fighter and you see why she admires the goblins. Sadista is sadistic and selfish but does succeed until you defeat her and Varis is the most successful and is shown to have cared for her sisters. We learn from her that all of them were probably humans who had once died but were raised by “Mother” into this new state where they are part human and Netherim. After “Mother’s” defeat Varis attempts to grab the ember heart and is pulled into the Clockwork Core when it reignites once more saving the world from the Netherim invasion. I suspect we’ll see her in a later game or expansion and “Mother” is still around she just doesn’t have a host body.

The Boss Battles – The boss battle are challenging. Ordrak from the first game is still the most challenging endgame boss but fighting Sadista and Brall (especially Brall) was a fantastic challenge that took learning the patterns of attacks and when they one-shot attacks would happen. The fact that was a warrior type meant early on I was in the thick of battle so Brall was the most difficult there. The final boss was also hard but at that point I had so many skill points into powerful abilities maxed out that I was able to defeat “Mother” in the new corrupted reincarned Odrak body that she was easier than Brall. There are also bosses of each type (Vultera, Goblin and Hyvid) who you fight and artificial robots too. They usually have patterns you can figure out and if they are at the end of a dungeon they are hardest if elites are summoned along with him.

On the Grind – There are some areas that are real grindy as you level up high enough to really stand a chance in the next area above your level. This does become easier once you hit a certain level and can fully empower certain skills but before that I stopped playing a few times because of how annoying the grind could be.

Who is the Main Villain? – We never learn who “Mother” is. I think the implication is she is some powerful type of Netherim and her leading the Netherim army but we learn nothing about her and her aims post-invasion. She is setup akin to Ordrak in the first game but we never see her interactions in-game beyond her children (Ordrak corrupted someone for example) and I wanted to learn more. She is the focus and has characters who know some degree who or what she is but that isn’t reflected as well as it could be in the text.

The Somewhat Cliffhanger Ending – So Varis has the Ember Heart and it is implied her being pulled into the Nether is going to transform her in ways she can’t protect. The final scene also shows the character who is implied to be “Mother” I think with her eyes and arms over the world. This is contrasted with the happy ending of your victory making it feel very much like a cliffhanger. So is this going to be Torchlight III or IV? This is big or me because the game is in early access and there is no guarantee they will make enough money to make future content.

I had a good time playing this game and I do hope we get more story in the future. I enjoyed the consistent enemies in zones, the sisters were fun antagonists and the skills and artifacts as well as character types give the game a lot of replay option. The variety of pets and ways you can decorate your fort helps too. This game isn’t great as there are story issues and the grindyness stands out but I still consider this a good game. If you’ve enjoyed the franchise so far, definitely check this out.