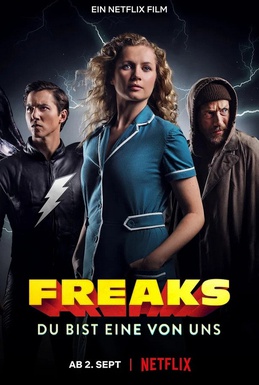 “Freaks – You’re One of Us” is a Netflix film that had the potential for greatness. The music is wonderful, the core characters and their relationships work and it really just falls apart in messaging and how jumbled it is in the beginning. This is not a long film but it feels long because of how long it takes for character advancing moments to happen. I’ll get into more detail below but without going into spoilers this is a film I’d recommend to anyone looking for a neat take on superheroes.

The film was directed by Felix Binder and written by Marc O. Seng.

The story follows Wendy who is taking medication after an incident from her childhood. After the mysterious Marek approaches her and proves superheroes exist she begins to explore that potential within herself.

The Soundtrack – The soundtrack of this film pops. You’ve got a lot of popular 80’s songs that are covers that Wendy listens to on her walkman to and from work. This use of music adds an organic element to the story and also keeps the characters grounded. No matter what some characters may claim, they never stop being flawed human beings.

The Premise – The premise of superheroes having their powers being repressed by a pill and being outsiders isn’t anything new but this film still keeps it interesting as it is our world and no one believes in superheroes as they only exist in comic books. This is really what gives the characters and their arcs the potential for greatness.

The Main Characters – The main characters all work. You have Wendy and her family who is slowly coming into her power. You have Marek who escaped from the institute and is living as homeless man and is the one who shows Wendy the potential she has and there is Elmar who is a creeper co-worker who lives in comics and whose power acts as a corrupting mechanism. The three characters work and I wish them in their power had had more interactions as it is in those interactions that the film is strongest.

Marek – Marek is an immortal who is living in hiding after escaping an institute where his power was being repressed. We learn that his family died and he blames himself for it and has been unable to kill himself since that time. Wendy is the first character to give him hope and I really liked their friendship. She is there for his death when he is finally killed after the medication has been repressing his abilities. His final ask of Wendy is to rescue and awaken more people like them.

Elmar – Elmar is the villain of the picture. He lives at home with his dad and his dad’s girlfriend and blames his dad for him mom leaving. This resentment leads to escapism into comics and his dad is pushing him to have ambition. This takes a dark turn when he discovers his power and continues pursuing his co-worker Wendy. In the end he turns Marek’s location to the institute to isolate Wendy when they won’t become superheroes with him. His final act is nearly murdering his father and kidnapping Wendy’s family. She finally defeats him and his reign of terror comes to an end. He was a character with potential to become good but he never got out of his ego and selfishness so his character arc to villiany became obvious when Wendy and Marek wouldn’t join him.

Wendy – Wendy is our protagonist. She is bullied in her job and her only joy is in being a mother to her son as her husband and her are pretty disconnected from each other initially. It is when she is off the medication and defending herself and others that their relationship heals after Elmar attempts to kill her husband. At this point she is on the run with the rest of the members of the institute she managed to escape with and we see her planning to free more people but also knowing she can never be with her family again. It is a bittersweet arc but it works.

Wendy’s Family – Her family is okay. They are kind of stock character types who don’t get beyond that but the actors do an alright job. They are good in the dramatic scenes they are in but in the quieter scenes the husband looked checked out at times. That might have also been the character but her family is not written as well as the 3 main characters.

Slow Start – The start is real slow and it takes a while before we start seeing the question of “So what?” being answered. So superheroes exist and have existed, what now? There is almost too much time spent establishing Elmar and Wendy when fewer scenes would have accomplished how disconnected they felt with their families and within themselves.

Message in Medication – The problematic element of the film is how it seems to be anti-medication. It could all just be a plot device but it is hard to separate that given how the institute full of superheroes is a hospital that looks like a psychiatric ward. The fact that the doctor in charge is presented as sympathetic and only wants to help also plays into this. Given the anti-science bent behind the premise it just strikes me as problematic and a bit toxic.

This was a film that had solid leads, presents the idea of superheroes in an interesting way and overall works as a film. It is nearly good and within the narrative there is so much potential for the story to really be great. It is really only the few but strong cons that bring it down and why I can’t rate it higher. If you are a fan of superhero films and seeing new approaches to the many premises that have arisen out of comics than this film is well worth your time.

Final Score: 7.8 / 10 I would say solidly good if the start wasn’t so slow. This isn’t a long film but it feels long.