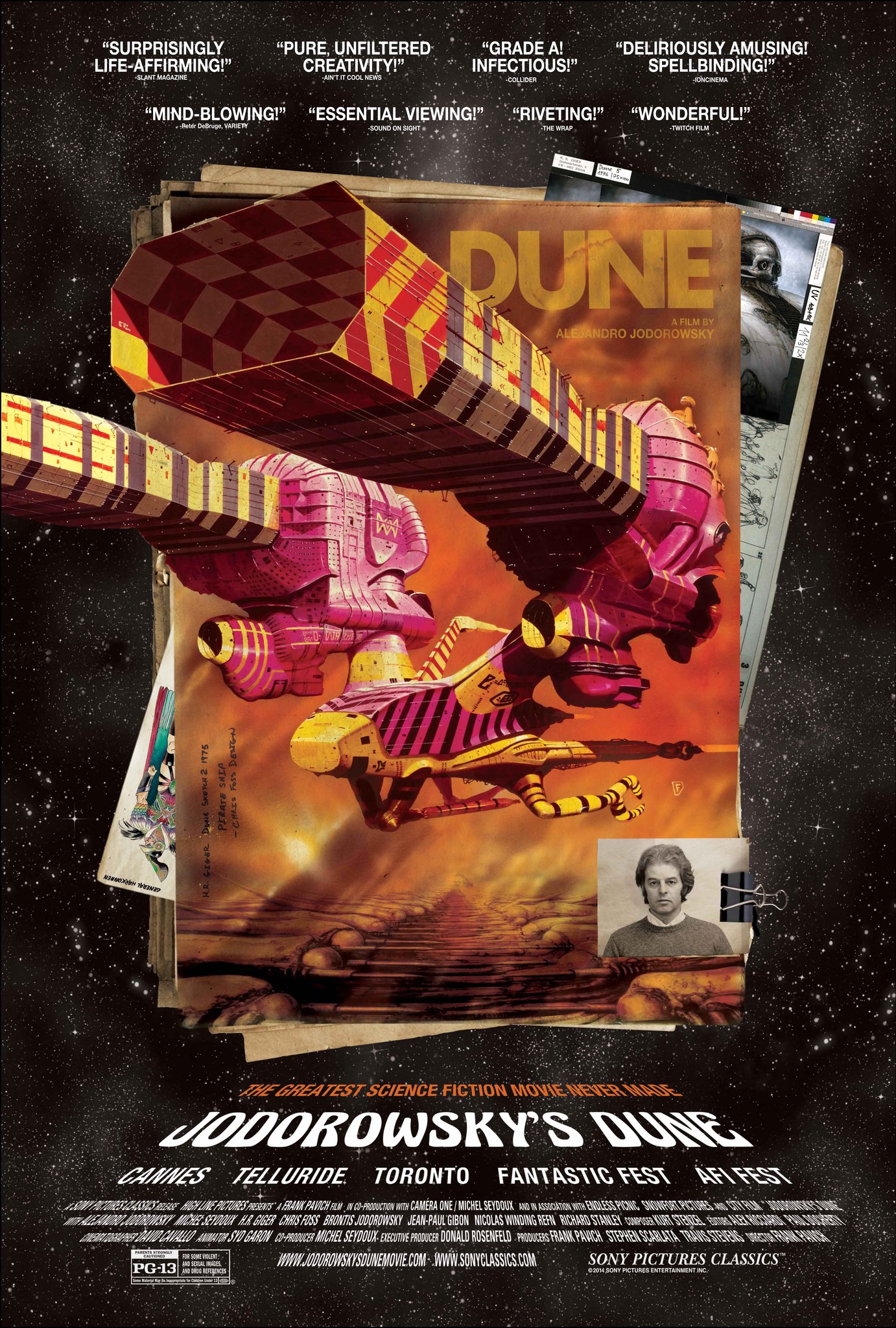 I really should watch some Alejandro Jodorowsky’s other films. Watching this documentary gave me an appreciation for the voice he tries to bring to cinema. This documentary is amazing in how many people it brings together and how driven Jodorowsky was to make it exactly as he saw it in his mind. For this reason alone I’d recommend the documentary as well as showing the process of production and bringing a film together.

Frank Pavich was the director behind this documentary.

The story follows the production of Alejandro Jodorowsky’s “Dune” and what went into this film that was never made.

The Soundtrack – Kurt Stenzel’s electronic soundtrack is beautiful and does a fantastic job of catching the ideas that played into Jodorowsky’s adaptation and ideas. I plan to check out some more of his stuff after this as the soundtrack was amazing.

Recruiting for the Project – Jodorowsky had grand ideas on who he wanted to be part of his production and no person, no matter how illusive or popular they were. It made for some fascinating stories that I’ll explore below.

Pink Floyd – Pink Floyd’s recruitment to the music for the House Atreides is a fun one. Jodorowsky shows up and the band is annoyed as they are eating hamburgers but when he proclaims they’ll be part of something that could change the world they get on board. It is was a short but fun story.

Orson Welles – Jodoroswky recruits Orson Welles to play Baron Harkonnen by finding his favorite restaurant in France, paying for his favorite wine and telling him he will buy this restaurant so he can eat there everyday. This is enough to convince Orson Welles after he initially expresses his disinterest in the project.

Salvador Dali – This film does a great job capturing the mystery of Salvador Dali. Jodorowsky courted him all over Europe with mysterious meetings at bars and locations and even after Dali signed on he wanted to be anarchy upon it to the point that he’d only do it for $100,000 an hour to act in the film. The compromise would they’d only film him for a few minutes and make a caste of his head to be the rest, which Dali was okay with if he could keep the caste in his museum after the film.

The Art -There are quite a few amazing artists who were brought into the project. We had H.R. Giger designing the Harkonnens and their castle, there was Chris Foss and Gene Giraud whose art was so beautiful and fantastic that I plan on reading up on their work later. Some of their art and the ideas of “Dune” also lived on in graphic novels that Jodorowsky did that I plan on checking out too.

The Legacy of this “Dune” – Dune was going to be 14 hours long and after every studio rejected it, bringing up times that would have been a lot lesser Jodorowsky eventually lost the rights to make it. Due to all the great minds brought on board though you could see the ideas and art live on in other franchises like “Terminator,” “Alien,” “Flash Gordon” and “Fifth Element.”

Alejandro Jodorowsky – Jodorowsky is the one constant in the making of his vision. We see people brought on board but it is always within the context of what he sees in his mind. His entire life became the project and you can see it in how he talks about what he envisions his “Dune” to be. This documentary explores that dream through his eyes and it is one of the strongest parts of the documentary.

Alejandro Jodorowsky – Alejandro Jodorowsky is the pro and also the con of this documentary. His vision is fascinating and he brings in so many talented people. He also cares little for sharing the stories of women or their part in “Dune” and he treats those he recruits and even his family as assets to his larger vision. Basically his ego which defines the story is also the biggest part of what brings down the very story being told.

The Lack of Women’s Stories – In this documentary the voices of women are barely in it. The only person who is a part of the show is has “Salvador Dali’s Muse” as her label and the casting of Jessica, easily one of the most important characters in “Dune” isn’t even discussed or part of the documentary.

People as Assets – Jodorowsky throughout the documentary at times seemed disconnected from the people he was recruiting or were already a part of him. They felt like assets he was using many times versus people with their own stories, especially in how Dali and Welles were framed. They were needed but their stories beyond recruitment were never explored further.

This was a fascinating and mad project given everything Jodorowsky wanted to do. This was very much ego and ambition being greater than reality but I’m grateful that so many of the ideas still lived on. This film explores the power and legacy that carries on in powerful art and I can’t wait to read the graphic novels that came out this project and check out more of the art of the amazing artists who were a part of this project.

Final Score: 9 / 10 I wish we could have seen some version of this “Dune” brought to the screen. It is one of my favorite books and the richness of the universe gives so much room for adaptation.