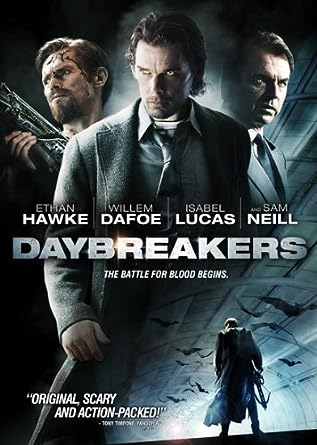 After finishing up “Penny Dreadful” I’ve been curious at the potential stories that exist in vampire, werewolf and undead stories. This film was recommended by a friend as I was seeking mystery to the story as well. This was a good example of the kind of story I’m looking for. The Spierig Brothers created a fascinating project here that really would have worked better as an anthology piece as the world is the best part and is clearly the part where most of the passion was, but the story is mostly solid and I hope someday they can return to this universe in comic or film form. Basically I recommend this film to any horror fan.

Peter and Michael Spierig were the writer and director duo behind this story.

The film follows a vampire society that arises out of a plague. The story follows Edward Dalton (Ethan Hawke), scientist seeking to create a form of artificial blood to deal with the blood shortage facing vampire society.

The Cinematography – I liked the cinematography in this film. It does a good job of making light and how it is used in harsh desert climates in both freeing and horrifying ways, depending on where and who the vampire is we are dealing with. Ben Nott did a great job showing the world that makes this film real.

The World – The world of film is easily strongest part. We see a society where vampires control nearly all of it but are dealing with a tiny human resistance and with a blood shortage leading them to transform into feral Subsiders, which a vampire becomes when it drinks the blood of another vampire. These Subsiders are a growing group through the film as vampire culture grows more desperate. An out is found though in a cure to vampirism through sunlight purging a vampire and a purged vampire blood being a way to turn other vampires human once more. These are the Daybreakers of the film’s namesake who drive the plot.

Frankie Dalton – Frankie Dalton is a vampire soldier who has the best arc in the film. This is a vampire nationalist who changes when he turns someone against their will and sees them become a Subsider being lead to their death. This breaks him as he joins Edward who is working with the human resistance at this point…he tries to drink from one of the purged vampires, which cures him and in the end he assaults the corporation controlling the military to save his brother leading to his redemption and death. We also learn that he turned his brother Edward to save him.

Edward Dalton – Edward is a better written version of another character of the same name who doesn’t drink human blood. We learn the reason behind this is he wasn’t turned willingly, but his brilliant mind is why the vampire elites like Charles Bromley use him to create blood demand and other sources of sustenance. Ethan Hawke does a good job as this introspective and mostly sad vampire who is saved and escapes with the last human resistance fighter we meet Audrey, at the end. His arc is one of hope for the human race as the Subsiders rice in strength worldwide.

Charles Bromley – Sam Neill is a great actor who deserved a better script. His character is still interesting as he mourns his daughter running away, but he turns her in the end and makes the “blood as bottom line” speech and is turned human due to ego when he tries to drink from a changed Edward. This was a character with potential to be more. He was fun being a baddy but the hints at complexity should have been explored more fully. Who was his partner? How did he form his corporation? Who was he before the plague?

Lionel Cormac – Willem Dafoe is a treasure who owns nearly anything he chooses. This film is no exception. In this he was a mechanic who profited off the plague by making cars safe to drive during the day for vampires after he was turned. In the end his joyriding and near death lead to him being changed back and he is the crazy Obi-Wan figure for Edward the rest of the film. He is so much as his reckless hope is what defines him and I loved that he saves our heroes at the end. His character was always a rebel and that rebellion is defined when he fights for humanity.

The Supporting Cast – The supporting cast is a lot of good ideas that are nothing more than stock character types. We have Audrey and her boyfriend who are only defined as rebels who can see good in vampires, that is never explored deeper. We have senator Wes Anderson, vampire senator who is fighting for peace too. We never get the why, he just kind of exists. These characters like Bromley’s daughter exist in a vacuum when they deserved to be fully realized on screen…which an anthology or show could have done.

Pacing of the Ending – The ending goes full B-Movie and slows down, which for me didn’t work. The ending was fine, I liked our heroes escaping with the chance of hope as Subsiders rise but the lead-up went on way too long. There are scenes of slow motion violence but do nothing but show us what we already know and lead to pointless betrayals. My thoughts would be different if the climax had been cut in half but the gratuitous length turned it into a con.

This is a film that was really enjoyable and was what I was looking for along the same lines as “Penny Dreadful.” Like “Penny Dreadful” a lot of ideas didn’t payoff but some of the characters had some real good arcs and I am interested and care about this horror and goth world the directors created. Like “Penny Dreadful” it could have been great and like “Penny Dreadful” I will recommend checking this out if the pros were as strong for you as they were me. This is a fascinating world that I hope we get to see more of someday and shows the potential of what can be done with vampire stories.

Final Score: 7.8 / 10 It was near good and with just a few more characters fleshed out and better editing at the end, could have been great.