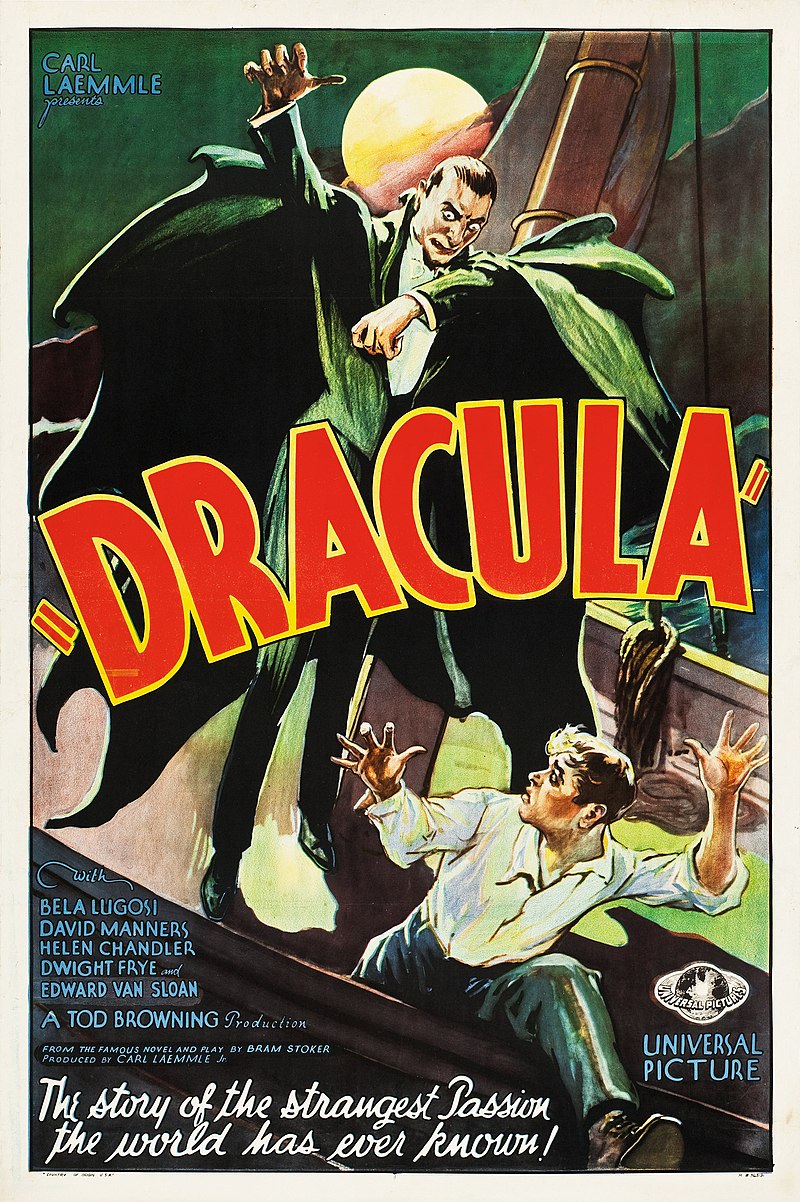 Besides “Nosferatu,” which I’ve already reviewed, this is the earliest take I could find on Dracula in film. This film is a true adaptation of the play written in 1924 by Hamilton Deane as the play does change the book in some major ways. The differences which I’ll bring up in the summary. Suffice to say, I’d recommend checking this film out if you are a fan of horror of Dracula lore. There is a lot about this film that works, enough for me to consider it good and worth a watch.

The film was directed by Tod Browning and written by Garrett Fort.

The story follows Dracula seeking to establish himself in England when he gets the deed from the Abbey from Renfield, who soon falls under his control. From here England must face mysterious murders as Dracula arrives on the scene meeting Mina, Lucy, John Harker and Dr. Seward as the drama unfolds from there.

The Cinematography – This film is beautiful. It makes great use of painted sets and the use of fog and light brings power to the fact they could only shoot in black and white. Karl Freund truly did an amazing job on this film.

Renfield – This guy hams it up so much and it works so well. He starts out as an idealist just wanting to do his job and ends up as Dracula’s creature who is completely lost in his will. This version is true to the Book in the wide strokes and he managed to elevate a lot of average performances in scenes he is in. Dwight Frye didn’t have to give his all, but he did.

Dracula – Bela Lugosi became famous as the monster man for a reason and this film truly captures that. I had not seen his work prior so this film was my introduction to what he can do as an actor. Suffice to say I was impressed. He manages to make Dracula attractive while also a frightening vampire, and this is with us never seeing any kills. Everything happens off screen in regards to the kills but Bela Lugosi sells the lead-up and truly has a threatening charm for him. No wonder this film got spin-offs and sequels.

Dr. Van Helsing – Edward Van Sloan is the only interesting hero in this film. He’s a hero doubted by the townspeople but he figures out Dracula and reveals it to the other heroes. He is very driven but you also see a man who cares as he truly wants to help the people in the sanatorium. The one thing that would have helped is his introduction being earlier. Dracula is winning when he introduced and he only starts losing when he arrives. This play is already so different from the book I would have liked him to be at the play and meet Dracula with the rest of the main heroes who die or do nothing.

The Rest of the Cast – Mina, Lucy and Dr. Seward and John Harker are wasted. None of them are given any nuance and we the performances do not elevate the lines and roles they play. Dr. Seward doubts Van Helsing but comes along and John Harker doubts Van Helsing but comes around. We get this arc twice and the characters don’t get any depth. I’m putting them as okay cause I didn’t hate any of the performances.

Nothing Elevated – The play ends in England versus the end in Transylvania to save Mina. The things the film did great I’ve already stated above but it could have been more. Beyond the core cast and visuals this film could have been great if it had explored the minor characters and world further.

The Brides of Dracula do Nothing – The brides only exist to look visually cool in this. There is one scene where they might feed on Renfield after Dracula but they never come up in any significant way again. I thought they’d at least be bodyguards or recruiters to bring more people to Dracula’s will. They are completely wasted.

This film is a classic and is well deserving of the acclaim. It is good but it isn’t great though. Lugosi and Van Sloan can only carry the film so much and in the case of Van Sloan he is introduced later when him being present earlier could have elevated the drama. I’ll once again say this part of history is worth checking out. I rented this film out of curiosity and it is well worth the watch.

Final Score: 8 / 10 From what I read of the play it is a true adaptation to it. It is a shame nothing was elevated further though beyond Dr. Van Helsing and Dracula.