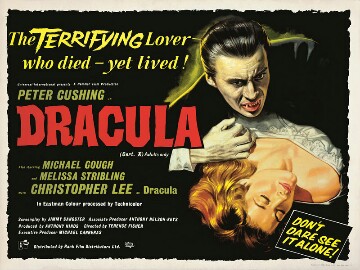 “Dracula” or “Horror of Dracula” made in 1958 is the first in the Hammer Series to star Christopher Lee as Dracula. This film unlike the more slow and introspective Lugosi film of 1931 is very much an action film. The role John Harker plays is different as are some of the other roles from their book counterparts. I really enjoyed this outing, especially the 3 main leads but founds the script wanting. It is for this reason I’d say it is enjoyable but doesn’t reach the level of good but I’d still recommend checking it out.

The film was directed by Terence Fisher with screenplay by Jimmy Sangster.

The story follows John Harker (John Van Eyssen), who we learn is a vampire hunter working with Van Helsing (Peter Cushing). He is discovered by Dracula and the plot unfolds from there as Van Helsing hunts Dracula down.

The Action – The action in this film is great, which is good since it is an action film. We see Harker save one of Dracula’s brides before he is turned by Dracula when night falls and later we have a few face-offs between Van Helsing and Dracula before a final confrontation at the castle. They are all extremely well done.

John Harker – John Van Eyssen is one of the best Harker’s I’ve seen on film thus far. He is complicated enough that he willingly puts himself at risk to save one of Dracula’s wives and driven enough to be working directly with Van Helsing as Vampire Hunter. Sadly his cover of being a librarian for an immortal being was pretty weak. He is turned in the end and Dracula has to kill him, giving him one of the more interesting Harker arcs on screen.

Arthur Holmwood – Arthur is in place of John going forward except he goes from doubting Van Helsing as he’s caring for his fiancé Lucy after his death and doubts the supernatural. It is only when his wife Mina is targeted that he becomes a direct ally and sees the raising of Lucy for himself. Michael Gough (Alfred from the first 4 Batman films) does a great job as the reluctant hero. The dynamic with Cushing reminds me of Holmes and Watson and Arthur makes a great Watson.

Dr. Van Helsing – Peter Cushing is fantastic in this role. He’s young, clever and has a level of disconnect from people around him. He’s distrusted by most and has to earn their trust through revealing the supernatural. This eventually grows into a comradery with Arthur. I can see why he’d face off with Dracula in later films as this Van Helsing is reactive and has an unknown past that drives his motivation that I hope they’ll flesh out later.

Count Dracula – Christopher Lee is legend and does such a great job making Dracula threatening. He can hold his own in his fight and is outsmarting the heroes through much of the story. His greatest weakness tends to be how his thralls seek freedom and family. If they hadn’t had this connection he would almost always find a way out. This makes him compelling and intriguing. He takes a lot to defeat and I can see why they brought him back later.

The Script – The script isn’t very good. Why does Dracula need a librarian? Where does the action take place? Dracula’s castle is apparently a carriage ride away from where all the action of the film is happening. People know vampires exist so how do vampire hunters and their order work? This film in trying to take an original path created a lot of questions it did not want to answer and this hurt the story.

Mina and Lucy – Mina and Lucy are once again victims who aren’t given a chance to be anymore than that. They are characters needing saving rather the women with agency. This was a problem in 1931 and it is sad to see it hasn’t changed since that time.

This film was an enjoyable action film that could have been more. If Mina and Lucy had been given more active roles in their own story and the script had fleshed out the world a bit more this could have been good or great. I’d still recommend checking it out as a good example of early Hammer Films and it is a treasure to see Christopher Lee and Peter Cushing face off against one another.