Warhammer 40K is a fascinating world and the first “Dawn of War” does a great job exploring it in the campaign and story. I wish the Tyranids had been an added faction though, as they are more well known than the Eldar it seems. Sadly the Tyranids would not be playable in this series, only through a mod are they playable in “Soulstorm” it is a pretty good mod though. Enough on what this game doesn’t have though, how does it work and what is the story?

The story involves the Space Marine Gabriel Tosh and his Librarian Isador going to the planet Tartarus to save it from the Orks. Things soon get out of control though as Chaos is seen to be working behind the scenes and the Eldar strike against. It soon becomes a race against time to get the Malidictum as an Inquisitor arrives to root out Chaos on the world.

The Pros: The Gameplay – The gameplay is much faster than “Starcraft” in regards to RTSs and reminds me a lot of “Warcraft III” where the name of the game is speed as you only have 2 resources to deal with and build times are fast. The factions are also unique enough in how they play too which makes it interesting as you capture points on the map and seek to take out the enemy’s bases.

The Factions – You have the Orks who are my favorite who like the Zerg can get a lot of units on the map and are mostly close range in their types of attacks and like fighting for the sake of fighting, you have the Eldar who are like a weaker Protoss but are good at hit and runs, you have Chaos who has a larger build time but some of the best end game units and has caster units as they are Daemon worshippers and you have the Space Marines who are the most balanced and serve their Emperor with religious devotion.

The Ending – The ending ends with Gabriel freeing the Daemon trapped in the Malidictum and vowing to get back at him. We never know if the Inquisitor was working for Chaos all along but the fact that the Eldar and Space Marines weren’t killing each other on the final mission was major progress which I liked. Tartarus is also lost and overrun by the Orks.

Okay: The Story – The story is alright but the Librarian’s corruption could have been handled better…everyone was way to naive and stupid with only the Eldar being the smart folks. The Space Marines were just as stupid about fighting as the Orks and Chaos was Chaotic Stupid as everyone turned on everyone and only the Daemon ended up winning as all his servants died in the fight which was enough to free him. I liked the Inquisitor, the Orks and the Eldar though. Gabriel was just bland, which is saying a lot given his backstory was destroying his homeworld after believing it had fallen to Chaos.

Orks and Eldar – The Orks and Eldar are okay. The mysteriousness of the Eldar and them knowing things about Chaos was handled great, but they had no named characters. The Orks weren’t much better but their love of fighting and being the biggest and meanest and loving Waghhh! Was done really well.

Chaos – Chaos was Chaotic Stupid though I did enjoy the Sorcerer trolling everyone and Chaos did have a great aesthetic and they were tough to fight at times…they actually felt like a threat!

Gabriel and the Inquisitor – These two are alright. The Inquisitor suspects Gabriel because he destroyed his homeworld but in the end trusts him after Isidor’s betrayal and we see them have a respect for one another as Gabriel distrusts him too since he is part of the Inquisition. They both have arcs though and in the end both lost to Chaos even though they survive.

The Cons: The Librarian – I didn’t believe in this guy’s corruption. He had no reason to seek power and we never saw him use what power he had for the Imperium. For this reason his excuse of using the power of the Warp and Chaos in that way was bs and in the end he was just a weak character with missed potential.

If you like the world of Warhammer 40K, you will probably like this game. It is one of the few Original “Dawn of War” games with a campaign and it is a lot of fun! The 10th level is the most difficult and the final level is easier by comparison but there is still a learning curve for those unfamiliar with RTSs, and if you are familiar the missions are fun and are a great way of revealing the story.

Final Score: 8 / 10 Needed more exploration of the other factions outside the Imperium and Chaos could have been written much more smarter. Still a good game though. 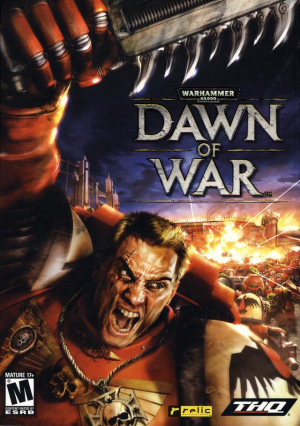 It’s been a while since I’ve reviewed games, the last one being gone home…as I’m still suck in the “Starcraft: Brood War” campaign reviews on the Zerg Campaign. I don’t feel comfortable reviewing the campaign or a game until I’ve finished the campaign and got to try out the other features. For “Dawn of War” this will be easy, minus the “Winter Assault” campaign of the 2nd game which I remember being rather difficult.

I’ve read some of the “Space Wolf Omnibus” as well as some of the Codexes on the different factions, so the world has always been rather interesting to since college, as my introduction to this universe was through “Starcraft” who took inspiration from this game.

This is a franchise that inspired “Starcraft” as the Zerg are inspired by the Tyranids, the Protoss by the Eldar and the Humans have space marines in both worlds and tend to have governments that end up being based in nobility or tyranny, and of course having no elected leaders. Where the emphasis on Starcraft was on politics though, Warhammer 40K has more so been on magic and survival as the different factions rarely if ever worked together due to them representing the worst of humanity so often (fear, zealotry, etc.). 40K is also more fun in a lot of ways as the Orks, love to fight for the sake of fighting.

In each of these reviews I’ll go into gameplay, what faction I enjoyed the most and how I thought the story campaign was executed. These will be the deciding factors on what score each of them get, and when I get a better computer I plan to do this for the “Dawn of War 2” franchise as well.