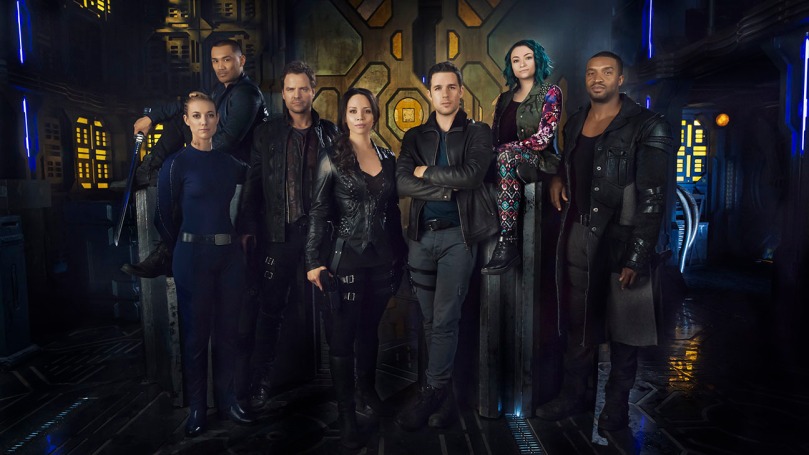 “Dark Matter” is an amazing show…easily the best science fiction show since “Continuum” (which this show has a lot of similar themes to). The fact that the creators of the comic book that the show comes from wrote for “Stargate” is probably one reason it is so good. At the end of the day it is a character driven show with the mystery at the core driving the plot. Before I get into spoilers I seriously recommend this show. If you like science fiction, you’ll enjoy Season 1.

The show was created by Joseph Mallozzi and Paul Mullie.

The premise involves the crew of the the “Raza” waking up with no memory of who they are. Each of them takes a number identity as their pasts unfold over the course of the show and deal with the threats of the Galactic Authority, criminals and competing Multi-Corps.

The Pros: The World – The universe is fantastic! We have the Galactic Authority, governments and nations and Multi-Corps all in a dance for power and influence with our crew of the “Raza” caught in the middle of it all.

The Premise – The premise takes a deep high concept premise of starting over with no memory and gives us the crew of “Farscape,” or “Firefly,” a group of outcasts who clash but have good hearts at the end of the day.

The Characters – The main characters are the strongest part of this show and it is great seeing Roger Cross again, as he was fantastic in “Continuum.”

The Android – Zoie Palmer is a wonderful Android! She’s easily the best version of this type of characters since Brent Spiner’s Data and it is great seeing her choose to become more human over time. She is the one most looking out for the crew through Season 1.

One – One learns he is Derrick Moss who took the face of a criminal named Jace Corso in order to find the person who killed his family. His drive to find his past is a major part of his identity as he nearly kills Three when he suspects Three of being the one responsible. He is the idealist of the bunch too, where Three is the cynic and he at one point has a relationship with Two as the reveal of her secrets don’t change how he sees her.

Two – Two is the captain of the “Raza” and is a designed organism. She has super strength and can survive almost anything. The organization that created her made her a slave and when the crew rescues her near the end of the season it is great seeing her and the crew get revenge. Melissa O’Neil is fantastic. Her other names are Portia Lin when she became the Mercenary captain and Rebecca when she was first created.

Three – Three is the cynic who was one of the biggest criminals and murders, who also had a past too as he meets his lover early on and loses her. He has a good heart at the end of the day though and even saves One a few times, even though he hates him. Anthony Lemke has great charisma in this role.

Four – Four learns he is a fallen prince who was framed by his Step-Mother. His real name is Ryo Tetsuda and he is the most hardened of all of them besides Two. He even kills his mentor after after his mentor attempts to bring him in but lets him go after all his men have been killed by the crew of the “Raza.” His story still has a long way to go but I like the pieces in play. Alex Mallari jr. did a wonderful job of speaking with his eyes as he is the least outspoken of the crew.

Five – Five is the hacker and the glue of the crew as it her core desire for them to be family that really makes it so they all work. She is the least trusted and the youngest but is a survivor as much as any of them…She is also the one who helps them find the good in themselves and holds one of the plot “Mcguffins” that drives the narrative. Jodelle Ferland does a good job in the role.

Six – Roger Cross is an actor I want to see more of, he was one of the best parts of “Continuum” and here he is the betrayer and also one of the core members of the crew as he is the steady presence the way Five’s kindness is. His reveal is learning that he is an agent of the Galactic Authority that changes everything leads to the end of the season (this reveal is hidden until the end).

Fighting Corruption and Finding Redemption – One of the major themes of the series is the fighting of corruption and seeking of redemption. When our characters learn about who they are they usually go against it as they were pawns of the Multi-Corps who cared nothing for life. This leads to them being idealistic thieves who do their small part against it all.

The Nature of Self and Identity – The nature of self and identity is a major theme. From the Android exploring what it means to feel and have emotions, to our characters who are seeking out their past so they choose what to do in the present. In all of that choices are made and even though our characters aren’t who they were before, they are still themselves.

What if You Had  Second Chance? – Our characters start out with no knowledge of who they were and as they learn who they once were they are given the choice to become someone different. Their self without what hardened them into criminals are the idealistic ones who are fighting the good fight and it is when one chooses their past life that they lose everything.

Okay: The Minor Characters – A lot of the minor characters are pretty forgettable. They aren’t bad but none of them made the list of pros for a reason.

The Ending and Reveal – The ending involves the crew turning on one another as it is revealed one of them is knocking out members of the crew. In the end it is revealed Six was an agent for the Galactic Authority and is taking them away to prison at the end of the episode.

Okay/Con: Early Season Dialogue – Early season dialogue is choppy and a bit to tell rather than show. It gets better about halfway but it is something to keep in mind. This was a major thing that kept the show from being great.

Lack of Clear Antagonist – There are a lot of antagonists in this show when what really could have helped focus the early moments where it lagged could have been countered with a strong villain. This show has “Farscape” tendencies and really needed a Scorpius. Maybe they’ll be one further down the line but everyone being an antagonist in some way can only sustain a show for so long.

This was a show that clearly has so much more potential and I’m glad that it has a Season 3 coming. The characters change and each episode we learn more about the world and mystery of it all. It isn’t as great as the graphic novel series “Saga” but it is cut from the same cloth and could even surpass “Continuum” in regards to this type of show, it really all depends on how the writers choose to handle the characters and world they’ve been given. I hope the show doesn’t go on forever, but it deserves a great end.