Season 3 of “Castlevania” is really good filler. There are a lot of pieces moving and characters are developed, but there isn’t the core driving action that was last season. I still highly recommend checking it out though if you are a fan of the show. There are 10 episodes this season and none of them are wasted. Warren Ellis has truly crafted an amazing story and I’m curious to see where the story goes next.

This season was directed by Sam and Adam Deats and written by Warren Ellis.

The story follows Sypha and Trevor uncovering the mystery behind a town, two twins befriending Alucard in his isolation, Carmilla’s plotting of conquest and Isaac as he creates an army in his quest to get revenge against those who betrayed Dracula.

Saint Germain – Saint Germain is a fantastic character. He is Lindenfeld seeking a portal in order to get back to his wife. He find allies in Sypha and Trevor and it is wonderful seeing them interact as he sees himself as above everyone but them. In a depressing season he is such a fun character who brings levity and humor to all that happens this season. He also helps save the day by closing the Portal to Hell when the Priory in Lindenfeld is trying to summon Dracula back from Hell.

The Sisters – Carmilla and her 3 sisters make up a Vampire coven in Styria who is planning conquest. In order to conquer they need troops though and this involves her sister Lenore seducing and tricking Hector into being their slave. I thought it was handled well as she showed a soft power approach and diplomacy compared to how blunt most of her other sisters are. Striga is the warrior who loves battle, Morana is the strategist and Carmilla is the spark and planner. They have a fascinating dynamic and I can’t wait to see Isaac, Sypha and Trevor take them on.

Sypha and Trevor – Sypha and Trevor are such a cute couple. In this we get to see how much they enjoy killing monsters and protecting people. Sypha especially revels in combat. They play off each other really well and it is the first time we really see a more happy Trevor…until the end. At the end they discover the Judge of the town they couldn’t save was a serial killer the entire time. Once happy fighting evil they discover the evil in humanity again and they have each other, but that is it. By the end of this season, they feel alone. They really should go back to Alucard.

Isaac – Isaac has a fascinating arc this season. He is driven by Dracula’s goal to exterminate humanity, though he still is willing to give people a chance. We see him spare those who show kindness and his conversations with a merchant, a captain and another Forgemaster make him realize that he should shape his own destiny. It is powerfully done and I can’t wait for him to take on Carmilla and her sisters.

Alucard – Alucard is alone and going mad until two hunters, Sumi and Taka seek him for training. He believes them at first until they try to kill him. This loneliness and betrayal breaks him and he puts their corpses outside the Dracula’s Castle as a warning, beginning to embrace the practices of his father, who also had lost all hope humans. He really needs Sypha and Trevor to bring him back to balance.

Hopeless Humanity – Isaac is attacked by multiple groups who are destroyed, Sypha and Trevor discover the evil in the town they couldn’t save and Sumi and Taka show that even those who appear good can do evil. This was the theme this season and is meant to explore why Dracula was the way he was. It is really well done and a proper way for filler to be handled.

The Twins – Sumi and Taka were slaves of Cho’s court. Cho was one of Dracula’s generals from Japan and we see how in control she was over the populace, even letting hunters in for fun. From this I can see why they don’t trust vampires but Alucard killed Dracula. Them trying to kill Alucard wasn’t fleshed out enough, they needed more development for the turn the story took.

Feels Like Filler – In the end what does bring it down is that it does feel like filler. It is good filler, but knowing a show could be canceled at anytime I tend to see filler as a waste. This was a good use of filler but the problem of it still happens. This was really good but if the show ended here it wouldn’t be a good end to “Castlevania.”

I really enjoyed this season. It is depressing as hell but the character development is well handled. I also love how big this world is. This season was largely setup for the big events that will no doubt play out and I think it handled it well. The only con was really the twins as I get why they existed (to make Alucard more like his father and lose hope in humanity) but their motivations needed much more development. I hope Alucard catches a break soon, he’s one of my favorite characters on the show and it sucks seeing him go through all this. Can’t wait to see how the upcoming wars go. 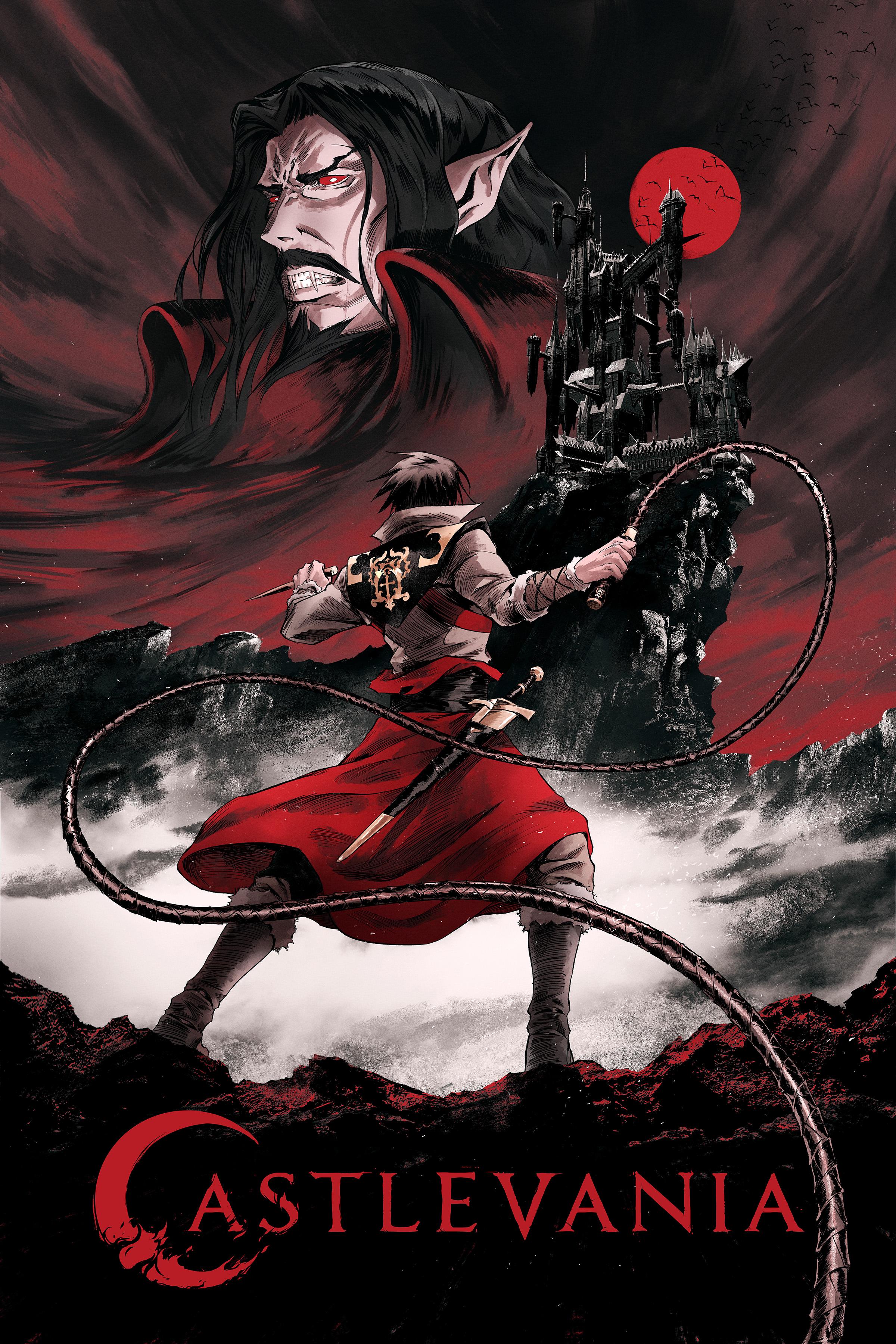 “Castlevania” is a great video game adaptation. This is a series that explores Dracula’s motivation and really lets us explore and get to know the world before it gets into the action. Without going into spoilers, the only issue is how short it is. The first Season is only 4 episodes long and each of those episodes is only 20 minutes. It could have easily had 8 episodes just off of the characters and the world and I’m really that it has been renewed for future episodes. The fact that this is an adaptation of a video game is all the more amazing given the track record of suck projects as they usually always end up sucking.

The series was written by Warren Ellis and directed by Sam Deats.

The story involves Dracula’s origin and what lead him to turn against humanity (turning it into the depressed hellscape of the games). After the origin we pick up with the last of the Belmonts, Trevor Belmont as he wanders the hellscape, just trying to survive and find purpose.

The Pros: Dracula’s Origin – Dracula’s hate is born out of tragedy. It begins with him as an illusive immortal lord who falls in love with a woman who wants to help the people through the medical sciences. Sadly they turn on her and we learn she married Dracula. Out of anger for the loss of his love he raises the army of hell and puts them on the population, leading to the status quo of the games. This is the first time in any of the games where he has actually been explored as a character and I love the character choices they made for why he became a monster.

People are Hell – A major theme of the story is that people are hell. The Church kills Dracula’s wife for being a “witch” and through the story we see murders who joined the church as enforcers and the general apathy of the general populace and our supposed hero Trevor Belmont. This theme is great at giving justification to Dracula and the question of hope even exists in this world.

Hope in Strange Places – Thankfully there is hope, both in the Speakers, travelers like the Roma who pass on stories of old who end up finding another hero, Alucard who is Dracula’s son who wants to stop his father since he knows the monster he’s become is not what his mother would have wanted. In the end Sypha (the speaker who finds Alucard) and Alucard show Trevor their is hope and give him a reason to fight. Also James Callis voices Alucard and Richard Armitage voices Trevor Belmont. Both these were brilliant casting choices and I really wanted more with both of the characters.

Okay: The Church – The Church is the Catholic Church and we only really deal with the corrupt members. One priest helps in the final fight but we never get his name or any of his story. Large organizations should have more complexity or their drive for power better explored…I hope we get both these things in the next season.

The Cons: Length – The show is only 4 episodes long and because of it the Church feels underdeveloped and we only get hints at the demons having their own agenda outside of Dracula. This is a shame as these were interesting ideas that could have been explored so much more. Regardless, I highly recommend this series. The writing is solid, the characters are fascinating and Netflix has once again made a great show.

Final Score: 9 / 10 Solidly great start to a series. Netflix has done it again.