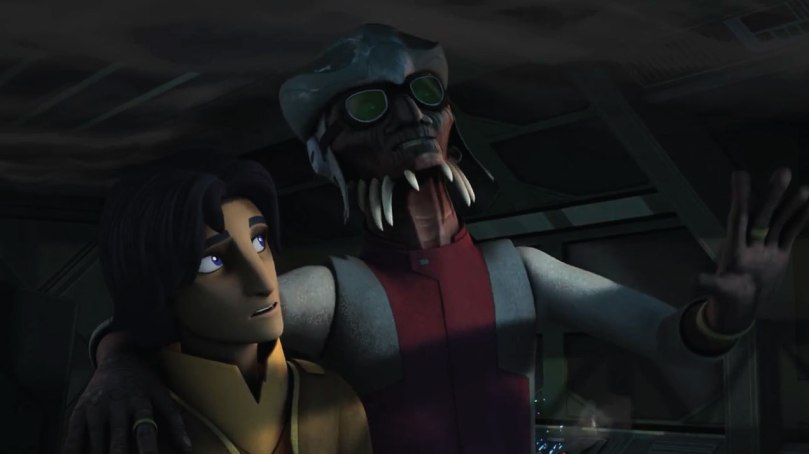 Hondo is back in a decent episode of “Star Wars Rebels.” This is an episode that largely explores Chopper and Ezra and reminds us that more of the characters from the Clone Wars era survived. It isn’t a great episode but it does what it has to do for Ezra’s arc in the episode to be completed.

The episode was directed by Saul Ruiz and written by Bill Wolkoff.

The story involves Ezra being overwhelmed with all his responsibilities so he decides to take the ship and Chopper to investigate a distress signal. It is there they discover Hondo who tries to make Ezra a member of his crew.

The Pros: Chopper – Chopper comes in handy this episode and we see that he is there for than comedic relief as we see him take on Pirate Droids and gangsters in order to save Ezra and Hondo from being by Azmorigan.

Captain Rex – His scenes are small as he only appears at the beginning and end of the episode but his scenes are great as we see him trying instill discipline in Ezra and train him to be a soldier.

Hondo – Hondo is back and hilarious! We see that he is very a smooth talker and loves the challenge or a worthy mental opponent. He survives, which is a theme of his as he survived the Clone Wars and is surviving the Empire. In the end he leaves with a respect for Ezra as Ezra gets the supplies he needs for a Rebel colony world.

Ezra – This is Ezra’s episode to show how much he’s grown and the episode does a good job of showing it as he quickly distrusts Hondo and is always trying to get back to his crew but with the supplies they need. He is quick on his feet too and acts with fairness even when dealing with cheats and murders like Hondo and Vizago.

Okay: Vizago – He is just kind of there as Hondo stole his ship and shutdown his droids. Rather than working with Ezra though we see him just act self destructive, which was a shame.

The Cons: Azmorigan – This gangster is weak and Chopper even chases him away. I wish we had another Underworld Boss as this guy has never felt like a threat…even when he’s holding guns against our protagonists head.

This was a good episode that is worth checking out if you have been watching the series or watched Clone Wars. Hondo is back and he feels like the character he’s always been, a survivor and pirate who will do whatever it takes to get more…though with some semblance of honor as he respects those who have a code. 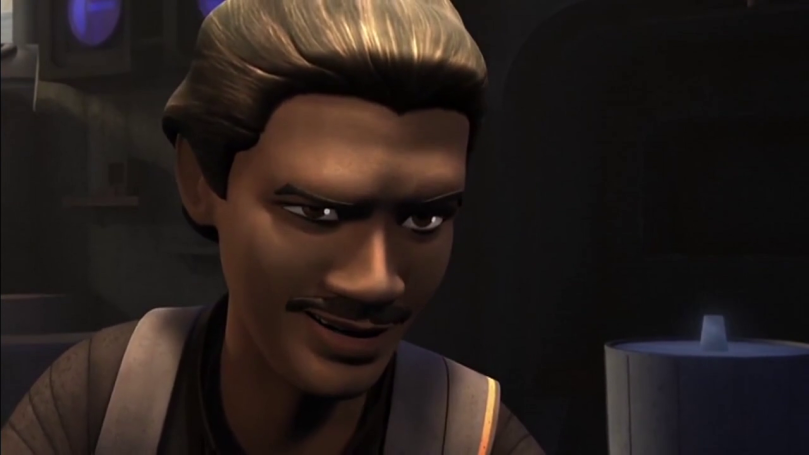 This is the episode that introduces Lando Calrissian and we see just how shady and brilliant as a manipulator in the game he actually is. We also see that two members of the crew are better or on par at the game as him though when the episode unfolds and the crew have to get him out of the hole he built for himself. This was an enjoyable but not great episode.

The director of “Idiot’s Array” is Steward Lee and written by Kevin Hopps.

The story involves the crew being low on fuel and money and needing a job which Lando offers to them after he gets Zeb and Kanan to gamble him Chopper. From here the story unfolds as they must face gangsters, the cargo Lando is transporting and one another as they seek to come out on top in the long game Lando is playing on them all.

The Pros: Introducing Lando – The fact that Lando is introduced winning a game of gambling is a great introduction to his character as well as his charming everyone but Zeb and Ezra. The others soon see how untrustworthy he is though as his game against a gang puts people at risk.

Sabine – Sabine is passionate about her art and it’s wonderful seeing her discuss the history behind her motivations as well as the fact that she does impressionistic art as well and not just graffiti. She is great in this and is good at setting boundaries with Ezra and Lando.

Zeb – Zeb gambles away Chopper and is trying to make up for it the entire episode. He is right about Lando having most likely cheated though and his distrust of Lando should have been listened to from the beginning. The fact that he thought gambling Chopper away was okay shows some of his flaws though and how Chopper is not fully recognized as a member of the crew until the end of the episode.

Kanan – Kanan also has droid prejudice as he is willing to risk Chopper after Zeb shows him his hand. He’s very defensive of all the crew though and reacts like a good human being when Lando trades Hera for the merchandise. After he saw that Lando had no problems using he people he stops trusting him at that point.

Lando – Lando is a sociopath and shade of grey who only serves Lando. We see this in his accepting of the trade of Chopper the fact that he trades Hera and even though he tells her how she can escape, the fact that it happened in the first place shows how low he is at this point in his development as a character. I hope the crew gets back at him later, seeing Hera punch him for trading her into slavery was rewarding.

Hera – Hera doesn’t put up with Lando’s crap. After he trades her for a gangster boss for a big to find minerals on Lothal she escapes and when she gets back to the ship she punches Lando and supports Chopper’s playing of Lando when he stole Lando’s fuel.

Chopper – This is a great Chopper episode! He gets into Lando’s good graces acting like his servant after Zeb and Kanan had traded him away and later saves Zeb’s life and steals Lando’s fuel, showing he’d been playing Lando the entire time. Chopper’s crazy but smart.

The Cons: Azmorigan – A fat alien gangster that isn’t threatening and is only creepy. Really hated this character and was glad when he was defeated. The fact that he was a threat to Lando was something I never believed.

Ezra – Ezra is so insecure when Lando is flirting with Sabine and discussing her art with her. Really Ezra, you appreciate her? Haven’t you got that she doesn’t like you and only sees you as a friend (really hope they don’t change this). He’s super dense in this and after how much he grew last episode it was a shame to see him regress.

This was a good but not great episode. The villain was weak, Ezra was an insecure idiot and Lando was a bit too sociopathic and crossed some lines that I would have not had him cross as a writer (selling Hera into slavery for one thing). This episode does show the darker side of the Outer Rim though, on the outskirts smugglers like Lando are king and the Gang Lords are the threat besides the Empire shaping the region.