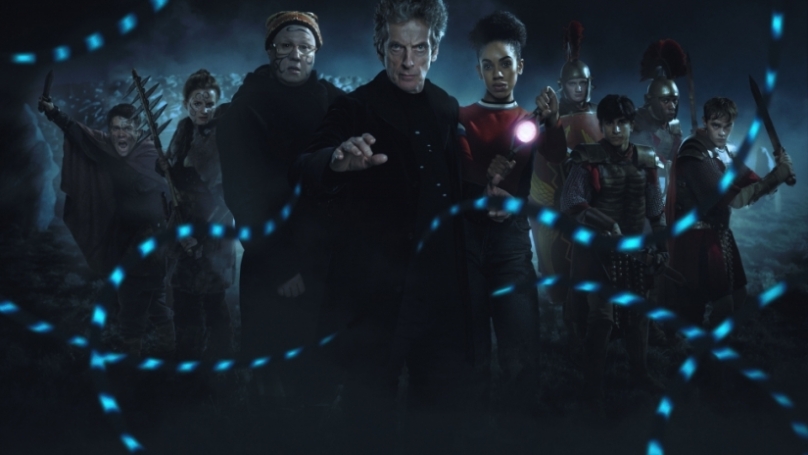 “The Eaters of Light” was an episode that the trailer made look terrible. Giant monster hunting soldiers…it didn’t look like it was going to be deep in any way and the monster looked uncreative as hell. Suffice to say I was gladly disappointed. This episode deals with similar themes as “Empress of Mars” and Capaldi’s Doctor excels as the peace Doctor. Without getting into spoilers, this is an episode worth checking out, as it gives justice to it’s characters, story and theme.

The episode was directed by Charles Palmer and written by Rona Munro.

The story involves Bill, Nardole and the Doctor investigating the disappearance of the Roman Ninth Legion in Scotland. They are separated and discover a creature is hunting the people in the region.

The Pros: The Factions – The native faction and the Romans are given a lot of humanity in this. You get why each is in the situation they are in, whether it was the tribe leader summoning the best to protect her people from the Romans or the Roman soldiers who had to follow orders or die. It is a bad situation and shows the tragedy in conquest as the people we meet are the few surivors from the war.

The Characters – I enjoyed the characters in this…we have some wonderful moments with Nardole becoming part of the trible, Bill helping the Roman soldiers find courage again and the Doctor as the peacemaker getting the two factions to stop fighting so the creature won’t kill them all and the world.

Coming Together in Conflict – There is hate and rage that has to be worked through by our characters as fear is what released the creature and since there are so few left of the tribe and Romans that they can only build it by coming together. It is very well done as they choose to fight the beast rather than let the Doctor do it in their place. It is a powerful scene and showed that even though the past wasn’t erased, to save the future the soldiers could come together. They even stop the Doctor from doing his heroic sacrifice as they realize that this was their battle to face.

Okay: The Magic Elements – There is music around the stones where the battle happened. I thought this was alright but also wasn’t needed. I wouldn’t call it a con though.

The Creature – The creature is kind of boring. It fears light and kills quickly and has a reptile mixed with an insect look. Apparently it is a space locust as they feed and eat across universes as they jump through dimensions. I would have liked to know more as what we’ve got is okay, but not great.

This is an episode worth checking out. I thought it would be a boring survival story with a misunderstood monster, but I’m glad that wasn’t the case. The minor and main characters get fleshed out and the Doctor doesn’t get to save the day. Capaldi’s Doctor is one who excels as the Peacemaker as some of the greatest episodes during his run have been like this one where he helps factions come together. I’m going to miss him after he regenerates.

Final Score: 8.2 / 10. Only reason it isn’t higher is the monster wasn’t all that interesting and the magic elements brought it down.

“Oxygen” is a flawed and amazing episode that is heavy handed with it’s message but is powerful in how it tells it’s story. This is one of my favorite episodes of the new series, even with all of the flaws. It changes things in a way that looks like it may last and we get to see more of the negative in humanity which we largely only got with the 9th and 10th Doctor. Suffice to say, before I get into spoilers…I recommend this episode.

The story involves the Doctor, Bill and Nardole becoming trapped on a mining space station where they have limited oxygen and are being hunted by A.I. suits as they rush to save the survivors and themselves.

The Pros: The Premise -The idea of a space station run off oxygen workers by is so wonderfully dsytopian I can’t help but appreciate it. It also gives tension and consequence immediately as the limited oxygen creates a ticking clock.

The Tension – The station expels all excess oxygen added to the station, which forces our heroes to get the suits where they only have a certain amount of breaths, on top of this the suits are controlling the dead who died from lack of oxygen and the survivors are fearful and angry. If any one of these goes over the edge, everything is over for our heroes.

The Miners – The miners are great, we get to see the politics and relationships between them and how they are survivors. They are the characters ready to do anything to get off the station which adds another level of tension to our main characters predicament.

The Doctor, Nardole and Bill – The dynamic between these 3 is wonderful. Nardole is the responsible worry wort holding the Doctor to his promise that he made Nardole make of keeping an eye of the Vault, Bill is the new adventurer who doesn’t have the Doctor’s recklessness the Doctor is the wizard, manipulating and planning his way through every situation even when it looks like he’s lost his mind and lost everything.

Consequences – The Doctor saves Bill but goes blind in the process from the vacuum of space. This is still true at the end of the episode and we see how powerless he feels as so much of what he does it tied to his ability to read what something by seeing it. I hope we have him this way for a while as even TARDIS tech could not heal his eyes.

Okay/Con – Execution of the Message – The message of the episode is that capitalism is bad and eventually people will be exploited for the very oxygen they breathe. I put this as okay because “Doctor Who” has always been a message show, the problem was this wasn’t done with enough “show” there was a good amount of “tell” even though we were witnessing the very premise and didn’t need to be told it. I won’t put it as a complete con but it was the weakest part of the episode.

This is a flawed and amazing episode that is worth checking out. The tension is strong throughout the entire episode, Nardole and Bill clash with the Doctor while the Doctor has moments where even he loses hope. We also have minor characters we care about and perfect tension through the entire episode. This is an episode that I highly recommend. Can’t wait to see how the consequences of the Doctor’s blindness unfold.