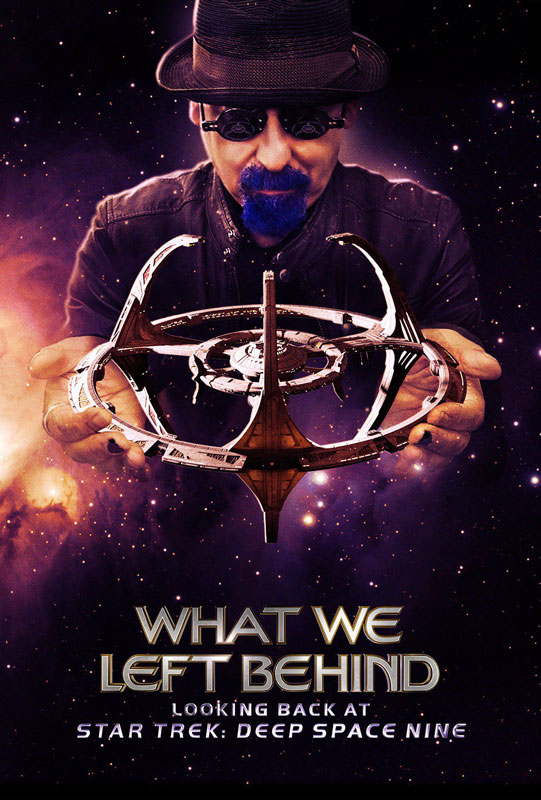 “Deep Space Nine” is my favorite of the “Star Trek Series.” This is a series that was willing to explore philosophy, religion war and give the minor characters full arcs. It is no wonder Ronald Moore created the rebooted “Battlestar Galactica” from this show, which is also one of my favorite sci. fi. shows. He was on the writing team while Ira Steven Behr was the showrunner. This is easily the best documentary I’ve ever watched. It has comedy, heart, philosophy, depth and explores the relationships and characters who made up the show. My bias being that “Deep Space Nine” is my favorite of the “Star Trek Franchise” and in Sci. fi. shows as a whole. It certainly has flaws and wasn’t perfect and this is a documentary that honestly explores that.

The documentary was directed by Ira Steven Behr and David Zappone, produced by 455 Films and released by Shout! Studios.

The documentary traces the origins of “Deep Space Nine’s” creation, the actors and their thoughts on the show, gives us a hypothetical new season with many of the original writing team and explores the legacy the show left behind.

The Into and Ending – The Into and ending were so corny and perfect. “Deep Space Nine” had Vic Fontaine’s Jazz lounge as a major part of the show and the Documentary paid tribute to that by having Max Grodénchik (Rom) kick it off with a corny song about leaving his heart on “Deep Space Nine.” In the end he is joined by Jeffrey Combs (Grunt and Weyoun on Ds9), Casey Biggs (Damar) and Armin Shimermen (Quark) to finish the song. It had so much heart, even if the lyrics don’t always work. The four of them are also great singers.

The Reaction to the Show – Throughout the documentary the cast reads fans letters as Ira Steven Behr interviews them. These are glimpses of history that show just how much the show was hated by some in it’s initial release. People hated that the show was darker and that it wasn’t daily exploration on a ship. The reactions are nuanced (Ira on making sense of how people saw it as a dark show) to funny when Aron Eisenberg (Nog) reads a reaction from someone who hated it. This was one of the aspects that added character to the documentary.

The Making of the Show – Making the show an episodic story beyond single bottle episodes or two-parters was revolutionary. This was a major part of the film, and beyond that how when most fans talked about the show in interviews it was largely about the Dominion War arc. It was the arc that changed everything outside of the arcs of “Babylon 5.” We also got to see the Writers Room when Behr got together with Ronald Moore and some of the other writers from the show to draft a pilot for a new season. It was really neat seeing that as well as the relationship between the showrunner, directors, actors and crew. They also went into the Evolution of the Dominion and how they evolved into a collection of species versus a single one.

The Actors’ Stories – Part of what makes the story so compelling are getting the stories of the actors and the relationships formed over the course of the show. We learn about how Armin Shimerman (Quark) used to host the other actors who played Ferengi at his home to go over the scripts. “Deep Space Nine” was full of Ferengi episodes and seeing how friendships grew out of it was so wonderful. We also got to see that Alaimo (Dukat) had a crush on Nana Visitor (Kira), and Avery Brooks (Captain Sisko) and how to this day he is friends and mentor to his show son Cirroc Lofton. The actors also talked about their characters and created interludes. Andrew Robinson (Garak) appeared early on and later to talk about how when he first played the character he played him as wanting to have sex with Doctor Bashir and how the character relationships evolved into a deep friendship. It was awesome hearing that first hand as Robinson always played Garak as Bisexual and him voicing that made me happy.  They also touched on Terry Farrell (Jadzia Dax) leaving the show and the disrespect from the directors as well as when Nicole de Boar (Ezri) took over for the last season of the show. Even with all that happened there are still so many friendships among the cast.

Taking Responsibility and Impact in Social Justice – This was a show that tackled the themes of poverty, race, war, philosophy and Behr took responsibility the fact that they didn’t explore gender and sexuality very well. They recognized the existence sexuality and LGTBTQ rights but didn’t advocate. Behr owned it and it made me respect him a lot. “Star Trek” has always been a progressive show and it has dropped the ball on LGBTQ justice all of this time until “Discovery” really.

The New Season Pilot – One of the arcs through the documentary getting what writers he could together to write a new season of the snow. The new season pilot is awesome. It starts with Captain Nog being attacked and a reunion of all the characters returning to “Deep Space Nine.” Kira is a priestess and the station is a religious site, Worf is in line to takeover after Martok to rule the Empire, Julian Bashir is a captain with Ezri serving together on a ship and O’Brien is a professor at Starfleet academy while Jake is a successful author. From here things unfold as it starts out with Nog being attacked by an unscene show before arriving at the station. From we learn of a Bajor / Jem’Hadar plot that Kira is tied to and the return of Sisko as he reaches out to his children. I would watch it and I wish it would get made. Sadly I doubt it will exist beyond the fandom of this documentary though.

What You’ll Get on the DVD – The documentary ended with Nana Visitor talking to Behr about everything that wasn’t covered. Whether it was her failed marriage to Alexander Siddig (Julian Bashir), her having a baby and how they wrote that into the show, “In the Pale Moonlight” and quite a few other things. Behr said they’d all be on the special features of the dvd and that it was cut for time. Hearing that lead me to pre-order the dvd. I can’t wait to see all of the things that didn’t make it and rewatch this perfect documentary again.

If it wasn’t obvious already, “Star Trek: Deep Space Nine” is one of my favorite shows of all time. This was the “Star Trek series” I felt was good to great all the way through and explored the themes I love in stories. It gave politics, philosophy, war, identity and history all in deep and respectful ways. If you are a sci. fi. fan I highly recommend this show. This show started so much and any time I have the chance to see these actors and writers if they end up in Portland at a Comic Con, you bet I’ll be there. This was a show funded by the fans and created for them and the time and love put into it made it the perfect documentary and film. I’ll be surprised if any film compares when this year is done.

10 / 10. “Deep Space Nine” is one of my favorite Science Fiction shows of all time and I can’t think of a better way to honor it. The actors in this cast are folks I’d go to comic con for if they make it over my way.