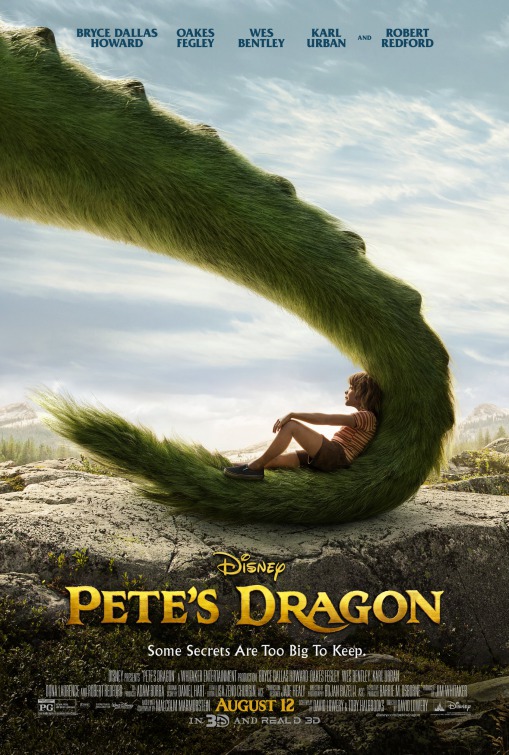 The new “Pete’s Dragon” is one of my favorite films. This is a film that manages to capture the wonder of nature, wildlife and childhood and also the complex relationships that come with family. The soundtrack leads to a beautiful meditation on it all with some absolutely wonderful performances by Bryce Dallas Howard and the legendary Robert Redford. Non-spoiler thoughts, I recommend this film and think you should check it out. I grew up on the original film and this film so different, and in my opinion so much deeper and better.

The film was directed by David Lowery who co-wrote the script with Toby Halbrooks and produced by James Whitaker.

The story involves Pete who is presumed dead when his parents die in a crash in the forest. It is here the dragon Elliot finds him and raises him before he runs into Ranger Grace whose husband is a foreman of the Lumbermill that has impeded on the territory where Elliot and Pete are living. From here the story unfolds.

The Pros: The World – The world is rich! The forest is full of life, the small town is full of politics and there is a dragon. This is very much a surrealistic fantasy world.

The Soundtrack – Daniel Hart creates a  beautiful americana folk soundtrack that captures the brutal feel of the lumber mill, the isolation of the town and the magic of the forest. It is meditative and reflects the feelings in our characters’ heads. Suffice to say, I can’t wait to see what music he does next as I’ve always been a fan of folk and it was perfect for this film.

The Characters – The characters are a strong part of this film! From Karl Urban’s Gavin who feels powerless so wants to own and capture Elliot as he’s in a dying industry (he works on a lumber mill) and his brother doesn’t respect him. Howard’s Grace is someone who is trying to make things work with her own family and make peace with the fact that her husband’s job is destroying the forest she works in as well as her own doubt of her father Mr. Meachum whose arc is capturing the magic of his childhood (Redford does this wonderfully) and of course the child actors who play Pete and Natalie who become friends as it is Natalie who helps Pete realize he wants to be a part of the world again and no longer separate in the forest.

The Wonder and Terror of the Natural World – The natural world is front and center in this story and all the wonder and terror of it all. It is almost hitting a deer that leads to the death of Pete’s parents and Elliot almost kills his new parents when he turns on his attackers and rage and attempts to burn them. It is only through respect that humans can co-exist with nature and with the natural world, is what the film argues. It is very Miyazakiesque and it is part of what makes the film so beautiful.

Okay: Dealing with Grief  and Loss – The film dealt with this a little bit but not really as Elliot was Pete’s way of dealing so we never him truly face the fact that his parents are dead. There are a few moments he misses them, but we never have the chance to see him face his grief. There was shock but after that not much else besides him forming a bond with a new family. It was dealt with a little but not enough for me to put it as a pro. The one way it worked was that Pete was tied to the forest and is always trying to run back until he faces his grief to some degree, which helps him form bonds in the world and a new family, in turn leading him to leave the forest.

The Cons: Jack – Jack, Grace’s husband is a plot device and is only there to counter the antagonist Gavin (his brother) who is hunting and captures Elliot. He never felt fully fleshed out and I didn’t know why he and Grace were together.

This was an amazing film that is the only one of the Disney remakes that I consider great. “The Jungle Book” remake was awful and even though I’ve heard good things about “Cinderella” and “Beauty and the Beast,” I am still worried. A good story can pull upon past stories, but it shouldn’t be a retelling, if I wanted a retelling I’d just read or watch that same story again. This film gets away from that and it is part of the reason it is a favorite film now. This is a film where magic happens and truly captures the beauty that can surround us.

Final Score: 9.5 / 10 Would be higher if Pete dealing with his grief had played a bigger role and Jack had been a character not a plot device.