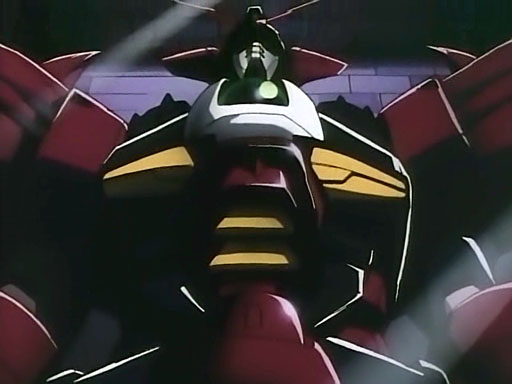 This was an episode that had so much potential that it did not fully realize. This potential largely exists because we get to see two of the best characters in the show explored (Treize and Zechs) but falls flat in Treize is handled and how Heero is still extremely static as a character. I’ll get into more of what I mean in the assessment.

“And Its Name is Epyon” was directed by Nobuyoshi Nishimura and Tetsuya Watanabe and written by Katsuyuki Sumizawa.

The story involves a trap set for Zechs where he rescues Wing Zero and fights against the Romafeller trap in space while on the ground Heero meets Treize who gives him Epyon and asks him to return a failure and kill Treize as Treize no longer has a purpose to fight.

The Pros: Zechs – Zechs is fantastic once again! We see him beat the Romafeller forces until he’s overwhelmed and sacrifices Tallgeese and honors it with his good-bye before becoming the perfect soldier in Wing Zero. Wing Zero doesn’t control him, he controls it…he knows himself enough and the reasons why he fights, making him the perfect soldier.

The Battles – The battle are all great. Whether it’s fighting the Romafellers in space via Zechs’s fight, or Heero in Epyon fighting their forces on the ground with the Treize forces. The action in this episode is really good.

Okay: Treize – Treize wants to die? It doesn’t seem to be over guilt more over listlessness and purposelessness. It wasn’t handled bad persay, but I expected more to come out of the conversation between Treize and Heero besides “Come back a loser and kill me.” I did like the fact that he brought up Relena is stronger than Heero, because at this point, she is.

The Cons: Heero – Heero is doing the same old dance and being overwhelmed by Gundams that are too powerful. First it was Wing Zero and now it’s Epyon. He is not able to kill Treize either thankfully and I think he might realize how vulnerable he is. I won’t say for sure until I know. Heero has a habit o returning to stoic soldier who fights for the sake of fighting a bit to easily. Won’t believe a change has happened until I see it.

This episode was lost potential sadly…and in my opinion you don’t need to see it beyond knowing Treize is rooting for the Pilots, which other episodes already establish. The Zechs moments are good at least. 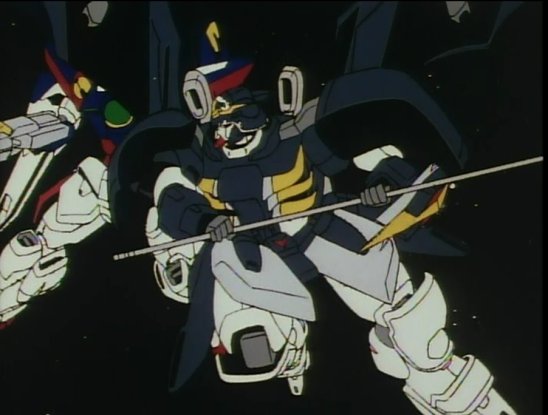 This was a good episode. I’m a fan of Duo so any episode where we spend more time with him usually makes a good episode to me, but we also get to learn why Quatre went insane beyond his already unstable mental state at the time and why the same thing happened to Heero…Gundam Zero is the Broken Gundam that will break you. This episode is at it’s core, an exploration of that.

The episode was directed by Yasunao Aoki and Nobuyoshi Nishimura and written by Katsuhiko Chiba.

The episode begins with Duo attacking the New OZ (run by the Romafeller Foundation) to get supplies to continue to upgrade his Gundam Deathscythe. Around the same time an OZ soldier named Trent is trying to gain control of Wing Zero, as he loses control in all the simulations. He goes to Hilde’s colony who is helping Duo and captures Duo so that he can use Duo to learn how to control Gundam Zero, from here the story unfolds.

The Pros: Duo – Duo is awesome in this! It is great seeing him use Deathscythe Hell some more and see his vulnerability as well when he hallucinates Deathscyhe and destroying Hilde’s colony in the simulation where he realizes that Zero cannot be controlled, which leads to him facing Trent and defeating him. He worries on who will use Zero as a weapon next as they’d have to greater than human.

Deathscythe Hell and Gundam Zero Battle – This is a pretty amazing fight, as Zero has close range and ranged attacks, where Deathscythe is primarily all close range attacks. In this way the most that Duo is able to do is neutralize Zero which is enough to kill Trent.

Hilde – She has a small role, but is awesome as she’s Duo’s partner in the revolt against the Romafeller Foundation.

Okay: The Romafeller Foundation – They are their via Tsuberov acting all powerless but still as a threat in the background. They function better as a threat in that way and I’m suprised they haven’t destroyed Gundam Zero yet or tried to make it a Mobile Doll.

This was a great episode, we see that Zero overwhelms who ever controls it and that Duo is working on building up Deathscythe himself, and working with Hilde on her colony. The Pilots are getting in place for the coming battle against Romafeller and preparing. 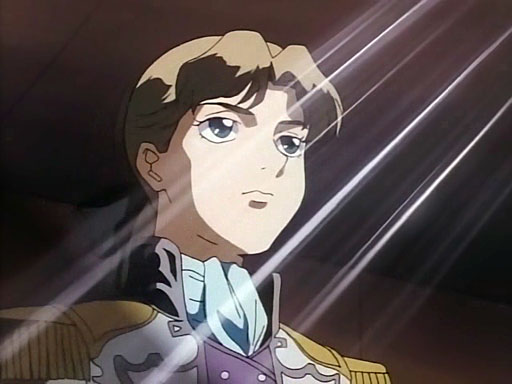 Relena’s passiveness is finally at an end, and we also get to see a return from some of the other characters that I really like on this show. This episode shows how different nations are dealing with the threat from the Romafeller Foundation, as well as how the Gundam Pilots are dealing with the loss of their mission. Right now, the one with the mission is Relena who is now leader of the Sanc Kingdom.

The episode was directed by Takeshi Yoshimoto, Shinichi Sakuma and Hitoshi Waraya and written by Masashi Akeda.

The episode begins with soldiers from one nation looking for Quatre and Heero under orders from the Romafeller Foundation that they are to be killed if found. Relena is holding a peace conference and forming a beadrock of passive resistance to Romafeller Power as Sally and Noin seek Gundam Zero. The character of Dorothy also arrives in the Sanc Kingdom and wants war to arrive behind her.

The Pros: Sally – Sally is watching over Gundam Zero and trying to find a pilot to deliver too but ends up changing her mind after Noin saves her life and says her nation needs it for protection against the Romafeller Foundation. By the end she respects and trusts Noin and gives her the Gundam as they fight off Romafeller from taking it.

Noin – Noin is wonderful in this! She is driven in her guidance and safeguarding of Relena and the Sanc Kingdom and truly gets Zechs’s point of view on why he was doing what she was doing. She’s tough as usual and does the most damage to the Romafellers before Sally gives her Gundam Zero.

Quatre and Heero – Quatre and Heero are grateful that they aren’t killed but realize they are putting the nation that has found them under risk by being there so they attack the Romafellers, take one of their ships and make their escape, believing that the most they can do is wander as they will put any nation at risk.

Relena – Relena is super active and the leader of the peace movement that is also against Romafeller power. She organizes the peace conference, gets the nations on board and all the while seeking the Gundam Pilots as a bulwark against the Romafellers. She sees the bigger picture and knows that some conflict is inevitable but that people should still come from a place of respect and find other ways to resolve differences besides war. I have a lot of respect for her character now.

Okay: Dorothy – Dorthy isn’t bad but I don’t know why she is so obsessed with war beyond being related to one of the leaders of the Romafeller Foundation. She is a good manipulator though, but given she was manipulating Relena, maybe I’m overstating that ability.

The Soldiers Who Find the Gundam Pilots – The folks who find Quatre and Heero are respectful and don’t kill them even though they know that doesn’t make them look good to the Romafellers. They even mourn the pilots after they recieve a letter on why the Pilots left to protect them.

This episode is a favorite, largely because Noin and Sally are always awesome and due to Relena’s actions of resistance against the Romafellers. This would have been a perfect episode if we just had that. The pilots were also great too, it was just a few of the minor characters who are pretty flat at this point who brought it down in quality. 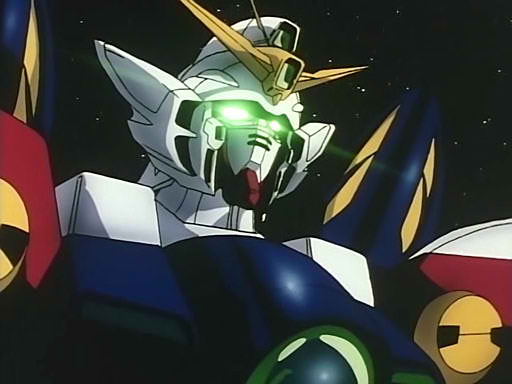 Quatre is back and he is broken. This episode answers the question of what happened to Quatre and shows how the Romafeller Foundation will do whatever it wants regardless of the people it has put in command. This was a good episode that went into different characters’ psychologies.

“The Gundam They Called Zero” was directed by Nobuyoshi Nishimura and Kunihiro Mori and written by Toshifumi Kawase.

The episode begins with Quatre in his new Gundam Zero destroying a resource sattelite and heading towards the Colonies after sending out a threat to destroy them if they don’t disarm. This calls into conflict the Romafeller Foundation versus Une. Tsuberov of the Romafeller Foundation wants to use Mobile Dolls to defeat Quatre while she decides to send out Trowa and Heero. He protests and decides to take things into his own hands after the Pilots head to face Quatre.

The Pros: Lady Une – Lady Une trusts the pilots and this may be coming back to bite her later as we learn Trowa is not loyal and still plans to destroy OZ. She “controls” the pilots right now, but for how long?

Tsuberov’s Plot – Tsuberov takes control with some OZ soldiers (not all are loyal to Une) and takes away the air in the prisons so that Wufei, Duo and the Scientists will die. He’s afraid since he knows how powerful they will be if they turn against them.

Wufei and Duo – Wufei and Duo are given the specs for the Gundams the scientists are upgrading which Wufei continues to study even after the air is taken away. Duo wishes he could join the fight but in the end gives in to despair as he feels powerless in the situation unless someone can rescue them. They have a great dynamic. Duo is the jokester while Wufie is his usual serious self always questioning versus Duo’s idealism.

Quatre and Gundam Zero – Gundam Zero is a beautiful Gundam and is quite deadly as it has a gun that completely destroys a Colony. Quatre has become a fanatic and the loss of his father has broken him. This is his personal vendetta against the Colonies now unless they disarm. He is so lost that even Trowa’s attempts to reason with him fail.

Trowa – Trowa is calm and collected but gets injured in the process when he attempts to reason with Quatre. He is undercover and waiting for the right chance to strike OZ, which he believes will be the right time when Quatre joins them. Quatre is his own faction now though…as Trowa learns when his OZ Gundam loses it’s arm.

Heero – Heero lives for the mission and says they may have to kill Quatre. He decides he will do just that after Quatre nearly destroy Trowa as Heero nows realizes he truly can’t be reasoned with.

The Cons: Unfinished – This episode feels unfinished as we are left with Heero facing Quatre…this fight could have been over with, which makes me wonder what they’re going to do next episode.

This episode feels unfinished so that is the biggest thing against it. The best parts of this episode where the character moments between pilots. Duo knowing that Trowa was still loyal to the cause, Duo’s idealism versus Wufei’s questioning. These are the moments that show this show’s strength. The Romafeller Foundation isn’t the strongest of enemies and I still think in the Gundam Universes the Zeon’s take the cake still.