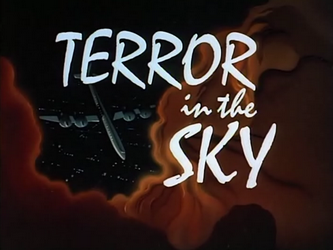 “Terror in the Sky,” continues where the pilot left off with the Langstroms. A humanoid bat appears once again terrorizing others which leads Batman to check up on Kirk Langstrom to see if he was the one who was the Man-Bat. From here the story unfolds. This is the story that completes the Langstrom’s arc in relation to Batman in “Batman: The Animated Series.”

Pros: The Langstroms – This drama is really about them and it is executed well. Kirk Langstrom has given up taking the serum it is discovered, but in the process he cut himself off from his wife Francine…which lead to her being used by her father Dr. March as a guenie pig. She tries to escape from him but ends up turning because of what her father did. It is only through Kirk and Batman that she is able to find herself again after being used. I liked this considering she was the one who saved Kirk in the beginning…it completes the circle and saves their relationship.

Batman – We see the sympathetic Batman in this…from his aiding of Kirk to helping Francine and confrontation of Dr. March. Batman is the light cutting through the dark in this episode to reveal the truths.

This was a great episode that I wish had gone more into Dr. March’s motivations behind continuing the experiments. What did he hope to gain and why hadn’t he learned from Kirk’s folly? These are the questions I wish this episode had addressed and keep it from being a favorite.