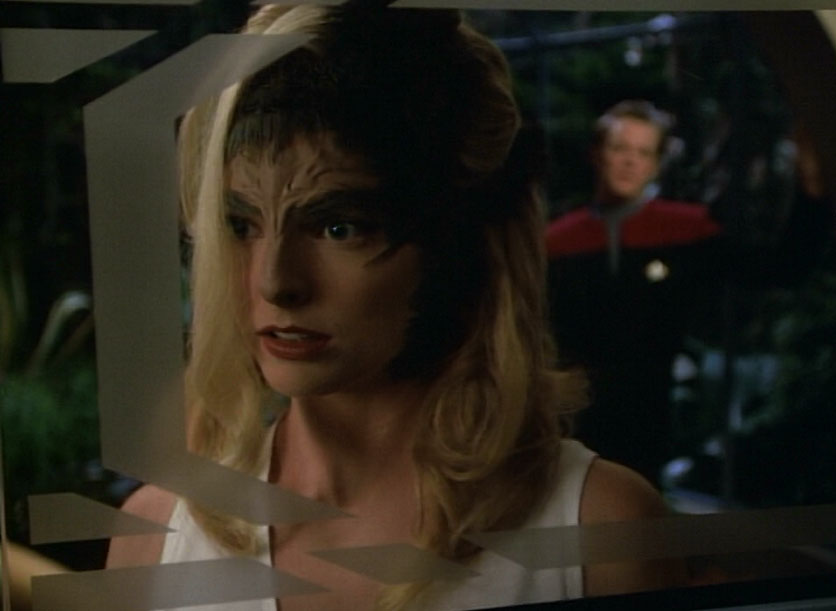 “Ex Post Facto” is early “Voyager” and trying to tell a Noir style mystery. Overall it works, though the greatest things against it is the dialogue. At times it felt like the characters were speaking as Noir archetypes, rather than characters which kept me from rating it higher. Tuvok is the most compelling character in the story and I was grateful to see him get some development. This was an episode I overall enjoyed and I’ll get into why below.

The teleplay was by Evan Carlos Somers and Michael Piller and was directed by LeVar Burton.

Tom Paris is convicted of murder, leading to Voyager and Tuvok investigating into events further.

The Mystery Presentation – The mystery is presented in interviews and a black and white memory file of the victim. This is beautifully done and LeVar Burton does a great job capturing the stakes and mystery of each scene, as well as capturing the tension between characters.

The Politics and Species – The politics of this episode are fascinating. You have the Banae and Numiri who are at war and once shared a world. Throughout the episode the Numiri are neutral to hostile and we soon see that there are some Banae working with them. I wish the conflict had been explored further, but the premise of the conflict as well as the designs were very well. The Banae look more human with feathers on their head while the Numiri are entirely reptilian. I’m glad they didn’t go cheap for the character designs on these two.

The Doctor’s Individuality – Kes is one of the first people to help the Doctor realize he is more than his programming. It is a really well done scene as she questions why he discounts what he cares about and if he’d ever choose a name. I loved their relationship in this as it had the Doctor as a mentor but also learning from the only person who could see his humanity.

Chakotay and the Maquis – Chakotay asks Janeway to do a Maquis tactic to neutralize the enemy Numiri forces and we see him work with Torres to pull it off. It is beautifully done and I wish we’d seen more of it. This is early in the show, so they are still showing the Maquis perspective on this voyage home. It was great seeing his origin as a Maquis put to use and him working with one of his crewmen (Torres) to pulls it off.

Janeway – Janeway is both respectful of the conflict she is in the middle of and not taking a side while doing everything she can get Paris back. I really liked her appreciation here and hated how when she came to Neelix for advice he acted like an ass. This is an episode that shows why she leads and I like how she calls out Chakotay’s tactic that is good they never met in battle. Even if she was bluffing it was a nice bit of dialogue.

Tuvok – Tuvok is the heart of the episode. It is his quest for the truth that helps it come to light. He mind melds with Paris and notices the height difference between he and the woman he was cheating on her husband with and also the data in the memory. It is from this he extrapolates someone is trying to pass information onto the Numiri due to them attacking everytime Paris is leaving or coming to Voyager. We learn he’s been married for years in this episode too and he accepts Tom Paris’s friendship which was a touching way to end the episode.

The Dialogue – The dialogue is really on the nose. Anytime characters are discussing the murder they sound like jaded cynics, which didn’t fit. When Harry Kim was talking like someone twice his age, I didn’t believe it. The best dialogue is when it is naturally occurring dialogue like Chakotay and his plan and any scenes with Tuvok.

Neelix – Neelix jokes around way too much for the crew trying to save Paris. He comes off as uncaring and not really knowing all that much about either people in the conflict. He was the only crewmember this episode could have done without and been better for it.

This is a solidly enjoyable episode. LeVar Burton clearly knew what he was going for in telling the murder mystery Noir and he captures this beautifully. The only issues were the dialogue at times and the motivation of the villains. We never learn why they were trying to get weapons to the Numiri and why they’d betray their own people. Besides this, we get to see so many of the crew shine and this never stops being an episode with stakes.