Any episode with “the Monarch” is usually gold. This is once again the case for “The Trial of the Monarch” and manages to flesh out the Universe more fully as well as show the darker and tragic sides to our characters.

The episode was directed directed by Jackson Publick and written by Doc Hammer.

The story involves the trial of the Monarch when he is tried for the death of a cop. Things aren’t as they seem though as Guild of Calamity is soon revealed as well as the falling out leading to the trial.

The Pros: Hank and Dean Venture – The brothers turn into a Shiva-Mech in an Indiana Jones-type Adventure at the beginning and are saved from being hurt by the Guild by Brock. They are naive and it adds a nice contrast to the drama.

Brock Samson – Brock respects the Guild for just how good they are at getting the job done and lets the Monarch take the fall for what he’s done in the past. It is interesting see his relationship with them as there is a mutual respect.

Dr. Orpheus – The Guild makes a deal with him that he’ll get a nemesis if he lies to implicate the Monarch. He does and it is so happy to see him celebrate at finally having someone he can face. This character is always fun.

Dr. Girlfriend – Dr. Girlfriend is shamed by the Monarch and goes back to a past love Phantom Limb but is ashamed of betraying him by joining the Guild that she mind controls the Monarch to blame the Venture Bros. She is great in this, you get why she leaves the Monarch.

The Minions – These guys make an appearance too and one of them dresses up as Dr. Girlfriend so that the Monarch can send his last wishes of what to do now that he’s in prison. It’s funny and sad. Oh the life of a minion.

the Monarch – The Monarch is shown to be both an ass (blaming Dr. Girlfriend for past loves, etc.) but in the end shows he is capable of being good. I wish he’d apologized but the guy is a child and that is kind of the point. All the antagonists and protagonists are children in maturity, so it makes things interesting since they can grow but it is difficult to get there.

The Cons: Phantom Limb – I don’t really get his obsession with getting rid of the Monarch outside of jealousy. I wanted to know more about him, but he just comes off as a creeper.

This was a great episode but not the best episode of the series. Truly that goes for any episode with the Monarch though. He adds so much to everything he is in since he does everything to the fullest. He is a villain you have to admire, and the tragic element of his character makes him interesting. I got a feeling he isn’t out yet. 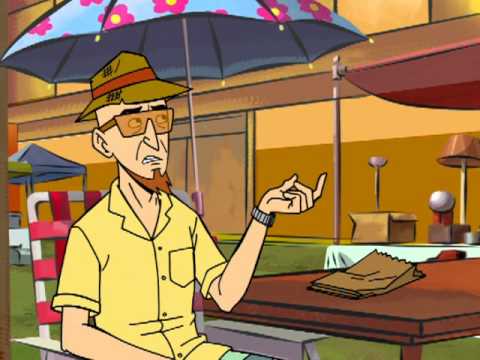 “Tag Sale – You’re It!” is a chance to see more of our characters interact with one another as well as see the legacy Dr. Venture in a way has left behind as well as funny antics by both the Monarch and Dr. Orpheus.

The episode was directed by Jackson Publick and written by Doc Hammer.

The episode involves Dr. Venture hosting a yard sale where all his old enemies and rivals come to buy his technology. Things soon unfold as the Monarch plots chaos to get into Dr. Venture’s lab.

The Pros: The Yard Sale – The Yard Sale is fantastic! Pete and Wizkid are looking to form an evil team. We meet Dr. Girlfriend’s old partner Phantom Limb, Baron Underbheit and Richard Impossible show up and quite a few others we have never met. They are all a lot of fun.

Dr. Orpheus – This guy spends the episode harassing super villains in order to a nemesis and rival. Sadly to no avail though, as none of them have a personal reason to hate him. Also, he’s Dr. Orpheus. Even when he’s a dick, he’s still the best person on Team Venture.

Monarch Henchmen – These two are funny. At one point one them buys a lightsaber and finds that Dr. Venture jipped him as when he attacks Brock it just goes through Brock and doesn’t hurt him. These two are great and I’m glad the show kept them around.

Dr. Girlfriend – In this we see how much Dr. Girlfriend cares for the Monarch as Phantom Limb from the Guild and offers to make her a member as she once held more power than she does now. I like how she stood her ground. We also see her soft side again when she feels bad for Dr. Venture and sees the echoes of the great man he once was.

the Monarch – The Monarch feels bad for Dr. Venture! We also see how good he is at causing chaos when he causes the fight that allows him to get into the Venture Compoud where it is very under-dramatic. He is disappointed in his arch-nemesis countless times and just feels bad for him, even as he affirms revenge once more at the end, showing just how deep his obession goes.

Okay: Team Venture – Team Venture is largely the ones spectating. We have Hank Venture start a business with Dean as one of his employees but it not go anywhere when brawling breaks out and Brock is just in charge of security and really doesn’t do anything noteworthy.

This was a great and fun episode. I like the sadness Dr. Girlfriend and the Monarch feel in Dr. Venture’s lab as they realize just how much of washed up has-been he’s become. This of course doesn’t stop Monarch with his obsession as he vows revenge as upstairs the boys watch him and Dr. Venture suggests calling the cops nonchalantly. It’s a great scene and was a big reason I like the episode so much.