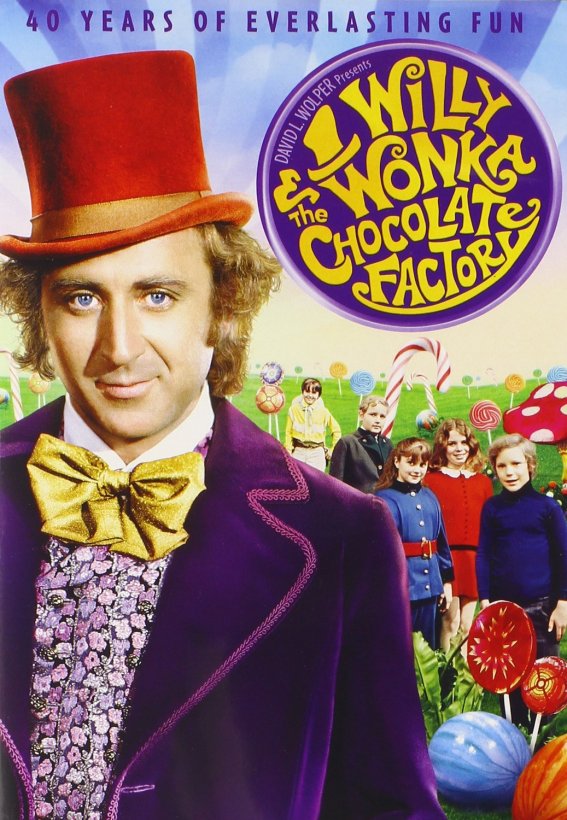 “Willy Wonka & the Chocolate Factory” is a well deserved for a reason. I completely understand that when I did poll on which film to honor Gene Wilder should be reviewed that this was the one that won out. This film that really displays how brilliant, talented and creative Gene Wilder could be and why the world lost on of our greats. I can’t wait to continue going through his filmography and learning more about the history of this fascinating and talented man.

The film was directed by Mel Stuart, written by Roald Dahl (who also wrote the book Charlie and the Chocolate Factory the film is based on) with help from David Seltzer and produced by Stan Margulies and David L. Wolper.

The story involves Charlie (Peter Ostrum) finding a golden ticket and winning entrance into the magical Chocolate Factory of Willy Wonka (Gene Wilder) with four other children. Things are not as they appear though, as both Wonka and the factory are full of unpredictability and danger.

The Pros: The World – The world is one full of magic that is close to ours but manages to satire ours through exaggeration. It is imagination and possibility and I can’t wait to read the book that inspired it all.

The Writing – Dahl’s writing is brilliant. He is one of my favorite authors and he did a great job making this screenplay. He knew his characters and how to adapt them and his world screen as he worked within the limitations given and in the process created a rich story full of drama and humor.

Snapshots of Humor – A psychologist trying to use a person’s delusions to find a golden ticket, a dictator in Paraguay, the homes of each of our children that aren’t Charlie…each of these is a snapshot of some sort of corruption that in using the golden ticket as the focal point provide a wonderful satire of the different forms of corruption.

The Comedy – The comedy is brilliant! Dahl’s dry humor and satire combined with Wilder’s wit, sarcasm and energy made this film most memorable as both a drama and a comedy.

The Oompa-Loompas – The Oompa-Loompas are refugees who work at the factory. They are fascinating as we see those who lost everything teach those who materially have everything. These guys are brilliant and I really like their songs and designs. The orange face and stark colors live in the popular culture now on what an Oompa-Loompa is.

Willy Wonka – Gene Wilder owns this role. Wonka is a man who you never know if he’s telling the truth or not. He comes in limping and after walks fine, and this was done by Wilder himself to make the audience question everything Wonka does. Wonka than proceeds to let peoples’ vices destroy themselves and he doesn’t care at all except to mock. This is a man who sees himself above it all and is living in his world of madness and imagination…yet he has a good heart, he rewards Charlie for doing the right thing and it is in his relationship to Charlie we see the compassionate core underneath the lies, sarcasm and trickery. He is easily one of my favorite characters in fiction and Wilder made the character larger than life and the best part of this film.

The Take on Vices – Each of the 4 kids are different vices. Violet is spite, Mike is anger, Veruca is greed and Augustus is gluttony. At different points Charlie experiences each vice but grows beyond them by choosing compassion and courage in the end, something they all lacked and each them is destroyed by their vice in turn in the Karmatic place of the Chocolate Factory.

The Good and the Bad in People and Children – Children are celebrated in this, but they aren’t idealized. 4 of the kids are little monsters and even Charlie can be a brat sometimes. Dahl was honest about what it means to be a child and it is in this work we see how they grow and that actions have consequences that will hopefully help the kids stuck in a bad place in their actions, to grow up.

Celebrating Creativity and Invention – The core of the story is a celebration of madness and creativity. Wonka’s world is pure imagination and what he is seeking is an heir with that same madness who can see the bigger picture.

Okay/Pro: The Music – The music is memorable and good but not great. I’d never seek out this music to listen to it on my own…it works for the film though with “Pure Imagination” being the best and most memorable song in the soundtrack.

Charlie – Charlie is flawed and it makes him human. All the other children and their parents are terrible, while Charlie in looking out for his family can become like the other kids too. Charlie is greedy or angry sometimes and that’s okay. It makes the good choices he makes all the better.

Grandpa Joe – I liked Grandpa Joe but since we never learn why he became bedridden it takes away from part of what drives him to get out of bed. I like how he is a mentor and father figure to Charlie though and that he calls out Wonka for not giving them the prize at the end as promised. He’s a stand up guy.

The Other Kids and Their Parents – The other kids are alright. Augustus is forgettable as his mother but the Teevee’s have an energy about them and the Salt’s are great representations of greed, while Violet and her huckster father are entertaining in their own way. I’m not putting them as a pro though since they aren’t complex. They are interesting but lack major complexity.

Okay: Pacing – The pacing is a little all over the place at times, with the scene where Charlie and Granpa Joe take the Fizz drink as the best example. Wonka and the group just go away when before every mistake that the kids make is recognized by the group as Wonka shames their for their vice. This is the only time where he holds off on shaming until after the tour is completed.

The Cons: Certain Songs – Certain songs go on a little too long or mess with the tone a little bit. “Cheer up Charlie” definitely goes on too long as does Veruca’s song. This is made up for the fact that musical isn’t terrible but I’d only describe music as memorable and good, but not great.

There was so much that worked in this film and managed to push it up from good to great. The greatest credit goes to Wilder with his chaotic take on Wonka whose performance was full of anger, empathy, compassion and madness. There is a reason the film is called “Willy Wonka & and the Chocolate Factory” and not Charlie. Charlie maybe the main character but the action and drama all relates to the antics and choices that Wonka makes and the gambit he puts into play to find his heir.I can’t wait to read Dahl’s original book. Dahl having power over turning his book into film was masterfully done by the studio and with Wilder’s performance and Stuart’s direction a masterpiece of art that celebrates the very nature of art and creativity was born. The three men have all passed on now but their vision, their metaphorical Chocolate Factory lives on in the lives they touched and the art they created. R.I.P. Stuart, Dahl and so recently now…Wilder. To remembering the dreamers and the dreams they made.