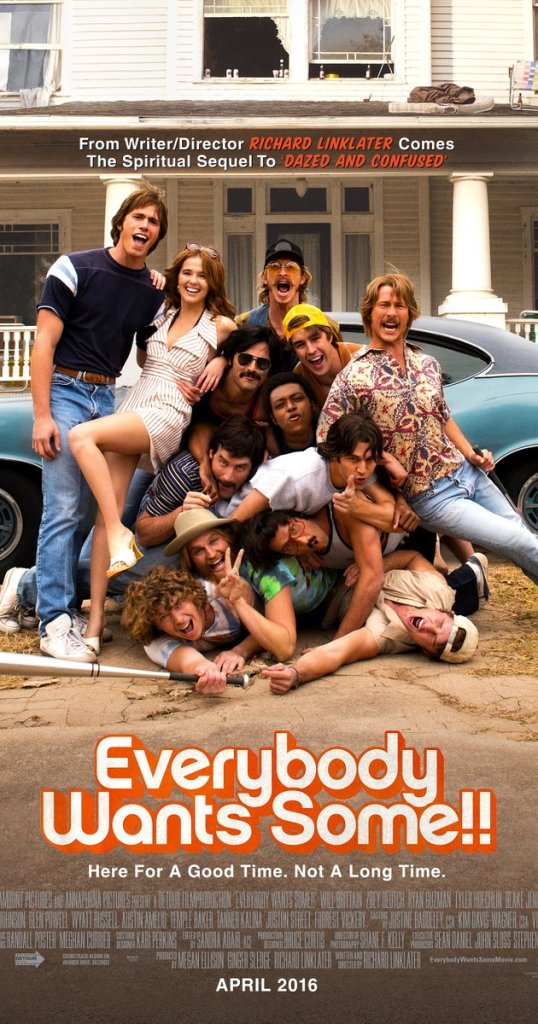 “Everybody Wants Some!!” might end up being my favorite movie of the year. This is a film that never stops being fun and brings depth to the purpose of being alive, group dynamics and the different parts of the self people reveal depending on who they are with and also a pretty real take on sexuality and some of the many expressions of it. I’ll get into greater details in the review, suffice to say on my non-spoiler thoughts…this film is one of the best out there.

The film was written, directed and produced by Richard Linklater and also produced by Ginger Sledge and Megan Ellison.

The films involves newly arrived Freshman Jake (Blake Jenner) who is part of College Baseball and is staying at the Baseball House since it is a legacy in relation to the College. There are a few days left until College starts and the drama and adventures he and his teammates have is explored.

The Pros: The World – The world is fantastic and manages to transport us back in time to 1980 where it takes place and from there we get to visit so many different environments and groups…from disco clubs, rock concert, country bar, the baseball team and theatre crowd…and none of them exist as stereotypes, they are fully fleshed out characters and it makes the world real.

The Cinematography – The cinematography is beautiful and captures the adventure and different environments and situations so well. If a character feels isolated you are in it, if the environment is big and large and the full ensemble is present…you get to see snapshots of all of them. Shane F. Kelly really did a fantastic job.

The Soundtrack – The soundtrack is awesome and is a fantastic blend of 80’s and 70’s songs that capture the different environments really well as well as the youthful energy of the young unknown cast, who I hope to see more of in the future.

The Writing – The writing is amazing! This is a film of show rather than tell as any good movie should be. We see characters ego and empathy and how none of them are simple caricatures. Characters may claim not to think but demonstrate just how much they think about things the less minute, characters can be jerks but the next moment they are backing up a character they put through Hell. The script is dynamic and shows what great writing actually means. Linklater truly nailed this film.

The Characters – The characters are complex and the actors are great. I didn’t really have a favorite and loved most of them, like I said in the writing…none of them are simple, each of them has a depth that is revealed over the course of conversations and the events of the film.

Group Mentality – Group mentality is something that’s analyzed in this whether it is the pro of people who have your back but at the same time can be cruel when you are the outsider becoming part of the group. This dynamic comes up countless times throughout the film as well as the core competition of the group given how serious being part of the Baseball team is shown to be. The group can the biggest troll or the greatest protector.

Humans and Sex – It is normal for people to want to have sex and this film embraces this. Whether it is a one night stand or a serious relationship sex is such a part of what makes us humans as well as our desire for it that this film cannot escape it, so it embraces it and shows all the different motivations for sex or mistakes that can happen during it. It truly is beautifully explored in this.

Of Faces and Identities – There are some great conversations in this, largely from Finn and how is is natural to shapeshift given we are animals and adapt to meet desires (in his context sex) or what it means to fit in and be your best self as Jake and his girlfriend Beverly discuss as so much of what drives them is their identity and how for them it is tied to motivation, dreams and as expressed in their relationship, the intellect and connection. The characters of this film where many faces and I found it a true expression of humanity and not just group pressure, people want to fit in or to shape a group and we see that here as ego and relationships are constantly in play.

Purpose – Purpose is another theme of the film, “What’s your focus in college?” as one of those questions, with others discussing the purpose of sex, dressing up, reality and even the purpose of the Baseball Team and one’s place on the Team either as outsider or something else. The answers are up to interpretation and that is where a lot of the power in this film lies.

There weren’t any issues I had with this film, it is a film that when I saw the trailer for it I thought it was just be a stupid party movie, this was so much more. This was a film that tackled all the different aspects of what makes us human and life worth it. It is hard to choose any favorite character since this is an ensemble cast where each character is shown to have at least more than one face or layer that helps define who they are. This is a fun adventure that manages to be so much more than that and this is a film that could easily be my favorite film for 2016.