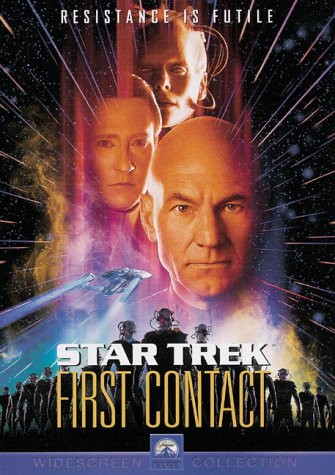 “Star Trek: First Contact” is the best of “The Next Generation” films. For me this isn’t initially doesn’t sound like much as I don’t think the others are good. They range from okay to awful for me where this was legitimately a great film. It isn’t perfect by any means, the ending kind of falls apart for one but this feels like an ensemble show. All the crew of Enterprise has a moment and many of them get the chance to grow and change over the course of the film. I’ll get into more of what I mean deeper into the review. As a kid this film freaked me out as this film presented how truly terrifying it would be to be assimilated by the Borg, and why they are one of the greatest threats in “Star Trek.”

The film was written by Brannon Bragga and Ronald D. Moore and directed by Jonathan Frakes.

The story follows the crew of the Enterprise-E when the Borg attack Earth. In order stop the Borg from winning they must go back in time to stop them and make sure that “First Contact” between the Vulcans and Humans still happens at the right time.

The Enterprise-E – The Enterprise-E is a beautiful ship. It has the torpedo look of Voyager while still having the curving appearance that most models of the Enterprise have. It is a powerful ship and you can see why it is the flagship as it barely takes any damage from the Borg Cube and does enough damage to the Cube that the Sphere has to be shot out and a time travel plan initiated. The bridge is much more military, reflecting a Dominion era ship, and the different rooms feel more mechanical and less like a lounge like on the Enterprise-D. Suffice to say, this is one of my favorite ships to come out of Trek.

Lily and Cochrane – Lily and Cochrane are the two people from the past who know about those who visited from the future and for both it is a different experience. Lily passes out after trying to kill Data and finds herself on the Enterprise-E, eventually meeting up with Picard and helping him find a way past his obsession to destroy the Borg for how they hurt him…and Cochrane is running from his destiny and being a major part of the future as Troi, Riker and Geordi eventually help him come to terms with the man he will become. Both offer a different view of time travel that I appreciated. I do wish we could have got more of Cochrane’s motivation beyond selfishness though. The Zefram Cochrane of this series is acted amazingly by James Cromwell, but he is a scummy dude who is only out for himself. This is a man who doesn’t see the big picture until first contact with the Vulcans. Lily, is someone who does get it and Alfre Woodard does a great job.

The Crew – The crew are given a lot of exploration in this film. The only one who really doesn’t have as many scenes is Dr. Crusher, but she is still active and protecting people when the Borg begin taking over the ship. She is also the only who saves Lily who ends up being the person who helps Picard come back to himself again. So I’m mentioning what she did here before I go into detail on the events surrounding the rest of the crew.

Troi – Troi is the one who first finds Zefram Cochrane. She ends up getting drunk with him before he finally admits who he is and has to sadly keep him away. Zefram is a scummy guy in this whose arc is really about becoming a better person. Troi is the one interacting among the people and who can see how much fear there is (this is Post World War 3). I wish we got to see more scenes like this as she is the one outside of Dr. Crusher who really sees the human element best.

Worf – Worf is fantastic in this film. We get to see him fight with The Defiant against the Borg and later face them on the Enterprise-E. It is the fact that the numbers of Borg seem to be endless that leads to Worf realizing they need to blow up the ship as the Borg are adapting more quickly than they can destroy them. Picard calls him a coward at this point before apologizing. I love that Worf isn’t played a joke as he is in the later films. He’s a Starfleet officer and one of their best.

Geordi – Geordi is the first to tell Zefram about the future and is in charge of repairing the Phoenix. It is Geordi’s admiration and descriptions of the future that end up freaking Cochrane out the most as he doesn’t see himself as a genius. In the end he comes through and Geordi and Riker get to make warp speed on the day it is supposed to happen in the timeline.

Riker – Riker is the one who hold Zefram accountable and makes it so he can’t run away from the future. He ends up stunning him, which finally helps him get his act together so they can get the Phoenix ready and first contact with the Vulcans be made. He’s in charge of the team on Earth and you once again see why he’s the First Officer as he pulls everything together and in the end, Zefram and Lily are the only ones who ever knew there were time travelers present.

Data – This film is really Data and Picard’s story and continues the theme of the show with Data’s quest for humanity. In this we have moments where his androidness comes in handy as when they he feels fear, he can just shut it off by turning off his emotion chip. In this the Borg, specifically the Queen offer Data a choice once he is captured. If he joins them he can have the organic and feel physical sensation as humans do. He goes along with it and ends up tricking the Queen and destroying their base. He does mention to Picard that for a near second he was tempted, which is long for an android. The Picard, Data dynamic is wonderful and you can see a friendship has grown between them over the years on the show and the loss of the Enterprise-D.

Picard – This film involves Picard facing what was done to him by the Borg when they made him Locutus. We see this at first when Starfleet doesn’t want him to face them because they don’t trust his judgement and later when after helping easily defeat the Borg we find they are around, and in his ship. This is powerful as Picard is trying to hold onto himself and his ego and in the process doesn’t notice when he loses people or how his obsession is consuming him. It isn’t until Data is captured and Lily calls him out that he calls for a retreat and realizes that losing another Enterprise is the only way to win. After this he goes to the Borg to save Data and comes open and ready to face himself and the memories of his trauma.

Ship Under Siege – What make the narrative work is that when the Borg beam onto the Enterprise it is a slow takeover, but by the time they’re discovered they are permanently entrenched. Our heroes are fighting to hold ground and to prevent more Borg being called so the stakes are high the entire time. This claustrophobia lends itself to the narrative and constant push of the Borg push into Picard’s obsession to destroy them and fight back.

The Trauma of the Borg – When Borg assimilate someone they are made part of the Collective. Their body is mutilated and machine is installed within them. This is what was done to Picard in “Best of Both Worlds” Part 1 and 2. Certain episodes explore how that hurt him, from killing Federation officers in the Battle of Wolf 359, to his loss of self and identity and being a part of the machine. This film explores this beautifully as it begins with Picard having a nightmare about his assimilation and his scene facing the Queen involves him facing that nightmare. It is a good narrative book-end.

The Quest for Betterment – Another major theme of the film is the quest for betterment. Whether it is how the Borg seek perfection through assimilation, Cochrane’s first contact and how it lead to humanity rising up to the Stars and the formation of Starfleet and the United Federation of Planets and Data’s quest to become human and more than his programming. All these elements run as the narrative through line and make the film great.

The Borg Queen and Ego in the Collective – The Borg are a Collective and to me that is what makes them the most terrifying. When the Queen is introduced she uses “I” and also is seeking a mate. My guess is they wanted to go for a bee hive for the Borg when they are much scarier as a one mind lovecraftian horror. The Queen’s ego, which a collective doesn’t have, is what leads to her losing as after Data sleeps with her, she fully trusts him and he betrays her and saves first contact and the Enterprise-E goes to waste. If she hadn’t had Data do be the one to fire the shot (which was just to rub in Picard’s face) she would have won. This issue of ego becomes an even bigger problem when she is back again in “Voyager.” The actress does a good job with what she’s given but the moment the Queen showed up, the threat of the Borg no longer felt as great, and the final act simply cemented that.

Picard Wasn’t Needed in the Final Act – Narratively I get Picard going to save Data, as Data saved him in “Best of Both Worlds.” The thing is, how the script was written the Queen would have lost whether he was there or not. She believed she had Data and Data knew what to destroy to stop her. He also isn’t killed or mortally injured after he does this. Picard showing up is just for the sake of narrative and to complete his emotional journey. I wish they’d re-written this whole act so that Data did need rescuing and wouldn’t have been able to stop the Queen on his own. Instead, Data stops the Queen, stops the Borg and makes first contact possible. If Picard wasn’t in the scene it wouldn’t have changed a thing.

If you are a fan of “Star Trek: The Next Generation” than you will probably like “First Contact.” It isn’t as strong as some of “The Original Series” films but it is greater than most “Star Trek” films that are out there. Overall it works and even though the ending didn’t need Picard and the Queen, kind of ruins the threat of the Borg for me, it is still a very well told story. This was a film tacking big ideas and major themes and I think Bragga and Moore accomplished that. The Borg are Picard’s Khan and this is one of the best explorations of that trauma that currently exists in the stories of “The Next Generation.”