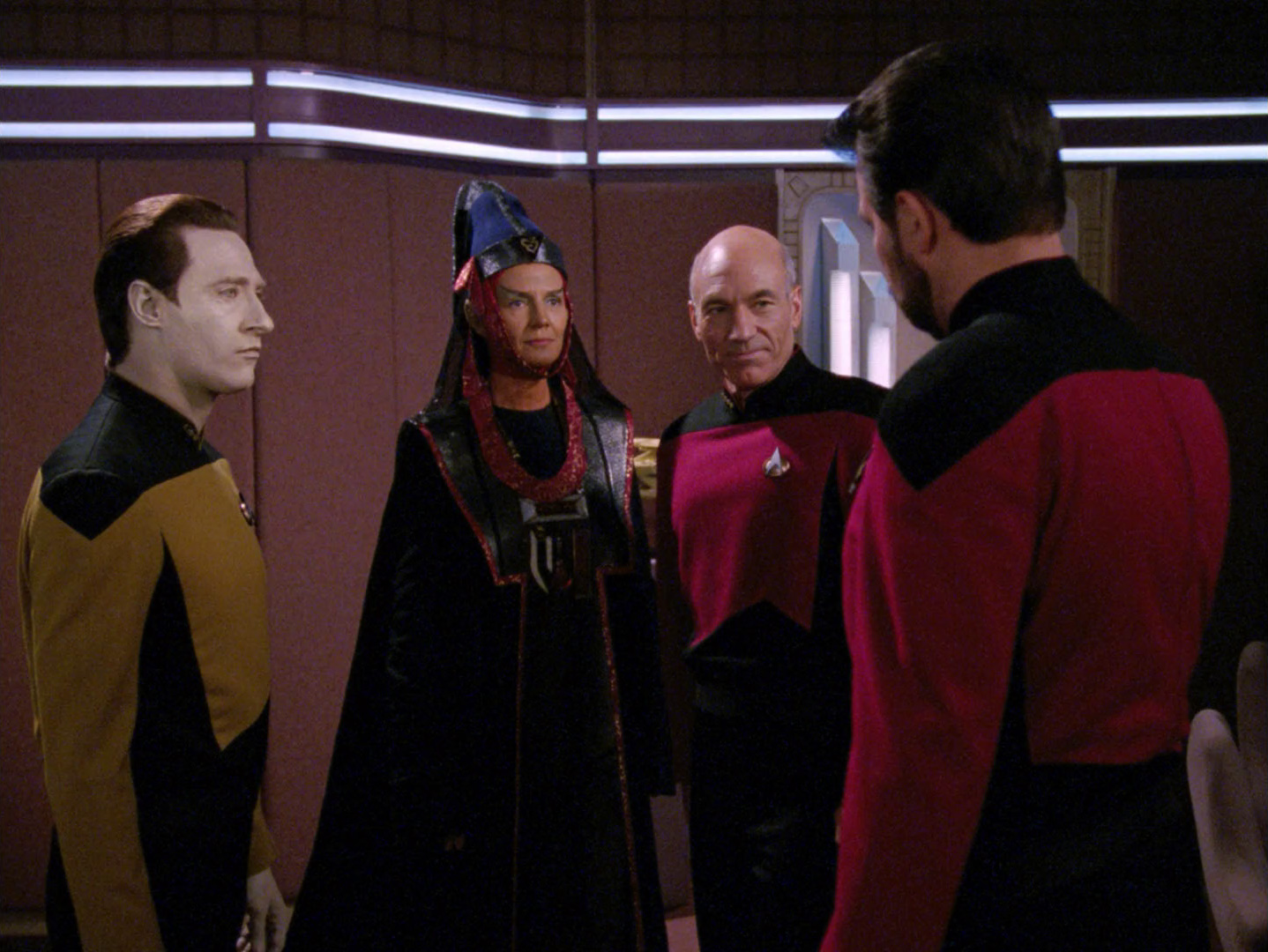 “Data’s Day” was an unexpected gem. I must have watched this episode years ago but I did not remember any of the events of the story so the relationships and reveals lead to this becoming one of my favorite episodes in “Star Trek: The Next Generation.” This is an episode told completely from Data’s point of view and it is beautifully handled as we see him navigate many intriguing and complicated situations. I’ll get into more of what I mean deeper into the review.

The teleplay was written by Ronald D. Moore and Harold Apter and the episode was directed by Robert Wiemer.

The story follows Data recounting his daily routine as he faces preparation for Keiko and Miles’s wedding and working with the Captain as they work with the mysterious Vulcan Ambassador T’Pel.

Data’s Correspondence to Bruce Maddox – The episode is told through correspondence that Data is having with Bruce Maddox from “The Measure of a Man.” I love that they became friends and that Data is still helping him with his research and understanding androids. This gives a personal nature to Data’s musings and what is going on in his mind. We get to see his connection to crewmembers and how his journey to be more human is going.

The Neutral Zone Mystery – Ambassador T’Pel is having the crew scan the Neutral Zone and after them meet up with Admiral Mendak’s Warbird. We learn that the idea was a secret meeting to establish a thawing of relations between the Romulan Star Empire and Federation. All as not as it appears to be though as it looks as if T’Pel dies in transporting over to the Warbird. I loved how much tension this mystery creates through the episode as T’Pel only gets along with Data and Picard.

Data’s Relationship to Members of the Crew – One of the strongest parts of the episode are Data’s relationships. In this he is “Father of the Bride” for Keiko because he was the one who introduced Miles and Keiko to one another and he navigates the conflict they are having before their wedding. He also comments how Worf is an outsider like him, Geordi is his best friend and he because of this he can try out new ideas with him. Dr. Crusher teaches him how to dance in one of the most wholesome scenes in “Star Trek.” He discusses relationships with Troi and comments on how Riker’s relationships and Picard’s advocacy has shaped him and the respect he has for them. We see how all are connected to Data before the wedding takes place and it is beautifully done. The crew and their relationship to Data is truly what made this episode stand out and the episode could have stood on this plot alone.

The Romulan Reveal – Ambassador T’Pel was a Romulan Agent Sub-Commander Selok the entire time. This reveal is done and gives us a Romulan victory as when Picard goes back to the Warbird her true identity is revealed. Picard has to retreat though as many Warbirds are coming to make sure she makes it back to their space safely. Admiral Mendak is an awesome antagonist and it was great seeing the Romulans get a win that was built on espionage and their intelligence.

Data Learns to Dance – Data learns to tap dance from Dr. Crusher first and it is adorable and wholesome. Once Dr. Crusher learns he is learning to dance for the wedding she teaches him Waltz, which takes more time for him to learn where tap he could pick up fast because he could see the foot movements and didn’t have to lead. I loved this entire sequence. It was so innocent and showed the little nuances that made Data so human. His relationship to Dr. Crusher is great in this too. She’s like his older sister and mentor and this scene illustrates it really well.

We get a great Romulan plot and an amazing plot showing Data’s relationship to all the members of the main crew. I could not find a single con in this episode and this episode illustrates what makes Data one of my favorite characters in “Star Trek.” As someone with autism I can relate to his analytical view of relationships and the disconnect he must feel sometimes. But I also get putting all the work into making those relationships last and work because they matter. Suffice to say, I highly recommend this episode. This is easily one of my favorite episodes in all of “Star Trek.”