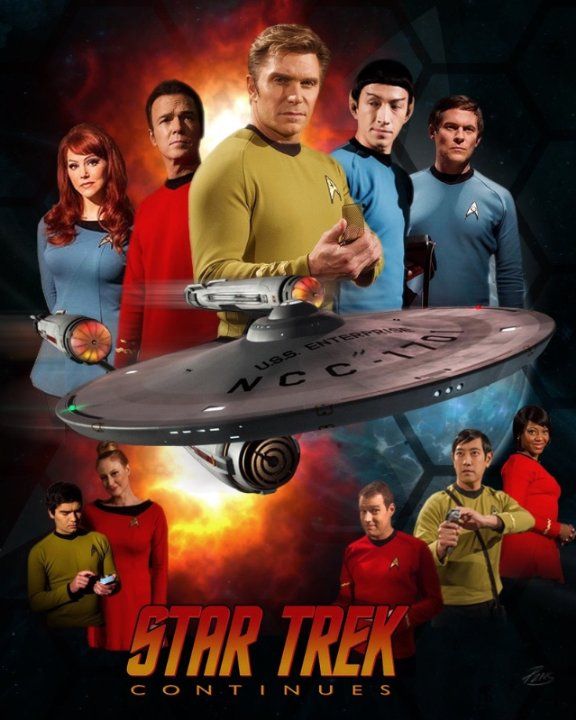 This is the first fan series or project that I’ve reviewed on the blog, and honestly after this, the standards for what fan films or shows I would watch is pretty high. A friend at work recommended it to me and I’m grateful he did. This is a professionally made production that looks just as good if not a little better than the Star Trek: The Original Series and has writing on par with the good and great episodes from that series.

The show was created by Vic Mignogna, who also stars as Captain Kirk in the series…and you can tell he’s a fan of the series. So much love and quality was poured into the making of this that I honestly wish CBS would show it. This is more than just a love letter to the series as it takes the lore seriously and expands on it, rather than going through the same beats.

The story picks up where the Original Series left off with the continuation of the 5 year mission of the Enterprise.  As part of that mission they are first to try out the Counselor test program (on whether starships should bring on full time counselors) bringing lieutenant Dr. McKennah to the crew.

The Pros: The Universe – This is “Star Trek.” The characters act how they do in the Original Series, the ships and galactic powers are in action, the Enterprise is exploring strange new worlds. Nothing feels out of place.

The Cinematography – The cinematography in this series is beautiful and it looks like a more polished version of how the Original Series was filmed of old. Whether it is fighting a Romulan Warbird or destroying a tiny object in space, or a fight on the ship or a planet…the sets look raw and real and it gives life to the show.

The Writing – The writing team and directors (who were largely Vic Micnogna working with a few other people but usually always at least directing) did an amazing job. The stories catch the morality of what make “Star Trek” great, whether it is feminism, equality and peace and understanding aliens and other beings. This is the through line through the series and it was one thing the Original Series didn’t always do (seriously, the sexism in some of the early episodes of TOS are horrifyingly bad). I won’t give away any spoilers but these episodes are so amazing I do plan individual reviews of them down the line, as well as a Top 3 post.

Connecting to Past and Future Treks – This is a series that connects the threads between TOS and The Motion Picture really well (and even ties into TNG with the Counselor program). In this you see what happens to the psychics, the Romulan Star Empire after the Klingon Alliance, Apollo, why we never seen any female captains and how things went down in the Mirror Universe. It is all done artfully while keeping the progressive strength of what made Star Trek so great in how it saw humanity’s potential in the future.

The Guest Stars – There are some pretty great guest stars, even though some of them I wish had gotten better writing. Colin Baker shows up as an alien leader, as does John De Lancie, Rekha Sharma shows up a scientist who Kirk had a relationship with, Marina Sirtis voices the Enterprise computer and Michael Dorn voices the Mirror Universe’s Enterprise computer. The guest stars in this are gold and they do a good job with what the writers give them.

Spock and Kirk – Spock and Kirk are the strongest part of this show and that is largely due to the chemistry between Vic Mignogna and Todd Haberkorn. Both have done anime voice work so my guess is that is how they must have met and formed the rapport. These are the two who receive the most exploration as we see both of their regrets as well as their dreams and aspirations. I won’t say anymore than that as the reveals of what those things are handled really well. Even when certain episodes were just good or fun these two kept me coming back as their acting was the strongest even in weak scenes.

Okay: The Rest of the Crew – Chris Doohan (James Doohan’s son) is fine, hell most of the crew outside of Kirk and Spock who aren’t guest stars are fine but none of them really capture the characters the way Kirk and Spock do. Part of the reason is they changed the McCoy actor after two episodes and Chekov, Uhura and Sulu really don’t get any more exploration than what they did in the Original Series, so that was a wasted opportunity and kept them from ever being good.

I highly recommend you check it out if you are a fan of the series. Seriously, Vic Mignogna created something wonderful that I will be coming back to again and again.